Osama Hamdan, Hamas' foreign relations chief, said Israel is stunned at the intelligence information about the capabilities of the Palestinian resistance. 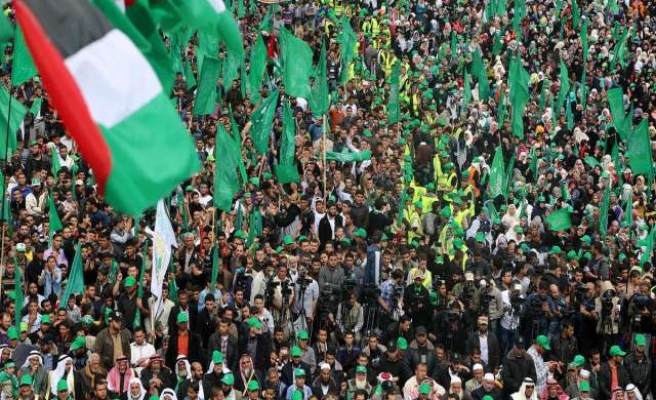 A senior official from Palestinian resistance faction Hamas on Wednesday warned that Israel's ongoing military onslaught on the Gaza Strip would lead to a "third intifada" (popular uprising) in the Palestinian territories.

"We are on the threshold of changes that will have strategic ramifications for the Palestinian cause and the entire Middle East region," Osama Hamdan, Hamas' foreign relations chief, told Anadolu Agency by phone.

He said Israel's assault on the Gaza Strip had already climaxed, noting that recent Israeli violations had first begun in the occupied West Bank, leading to the death of scores of Palestinians and the detention of hundreds.

Hamdan added that Israeli forces had raided Palestinian villages in the total absence of Palestinian security personnel, going on to accuse the latter of collaborating with Israel to detain Palestinians.

According to Hamdan, Israel has been stunned by intelligence information on the capabilities of the Palestinian resistance.

"Israel had thought that expanding military operations in Gaza would be easy," he said.

He added that rockets fired by the Al-Qassam Brigades, Hamas' military wing, had reached as far as Haifa some 80km from Gaza.

The brigades, he asserted, were also able to attack an Israeli naval base in Ashkelon and blow up a tunnel under the Karam Abu Salem border crossing.

He described the above operations as "only the beginning" of resistance activity against Israel.

"The resistance has a lot up its sleeve to counter Israeli aggression," Hamdan said.

He called on Arabs and Muslims to support the Palestinian cause, saying those who had "wronged" Hamas in the past would now have a chance to redress their mistakes by supporting the Palestinian people.

Hamdan called for reopening the Rafah border crossing between Egypt and the Gaza Strip so that medical supplies might be brought into Gaza.

By launching repeated airstrikes on Gaza, he asserted, Israel was hoping to derail an April reconciliation agreement between Hamas and the West Bank-based Fatah movement.

Israeli analysts have suggested that the long-range missiles that struck northern parts of Israel after being fired from the Gaza Strip were Syrian-produced M302 rockets.

Iranian produced long-range missiles that hit the Israeli capital Tel Aviv in 2012 was back then enough to deter Israeli ground troops from entering Gaza, but the recent attacks on Tuesday saw rockets reach as far as Haifa and Jerusalem.

It appears that despire the Israeli Navy intercepting an Iranian arms shipment, which included 40 Syrian made M302 rockets, believed to be headed to Gaza, some managed to get through.

Israel's Iron Dome only intercepted 23 out of 120 rockets over Ashdod, Ashkelon and the Gaza border, as the army began calling up the 40,000 reserve soldiers the cabinet approved for Operation Protective Edge, the Jerusalem Post reported.

Gaza-based Palestinian resistance faction Hamas on Wednesday called on Arabs and Muslims to converge on Israeli embassies around the world in response to escalating Israeli aggression against the Gaza Strip.

"Arabs and Muslims must force the Zionist ambassadors to leave," Hamas spokesman Fawzi Barhoum said in a statement. "This is the least they can do for Palestine and Gaza."

He called on Arab leaders to stand by the Palestinian people and those who were prepared to defend their homeland.

"There is no justification for the current Arab silence regarding the war crimes now being committed in Gaza [by Israel]," Barhoum said.

Palestinian Authority (PA) President Mahmoud Abbas on Wednesday said Israel was waging a war on the entire Palestinian people and not just Hamas, calling for urgent Arab and international action to stop the "bloodbath."

"This isn't a war against Hamas or any other Palestinian faction," Abbas said in televised remarks. "This is a war against the entire Palestinian people. "We have two families each losing seven members in strikes on their homes," he fumed.

"We have victims as young as six and as old as 70. Were these people firing rockets from inside their homes?" Abbas asked.

He insisted that Israel was not defending itself against rocket fire, but was rather defending its longstanding occupation of Palestinian territory and its policy of unabated settlement building.