Despite each having lost a leg in Israeli attacks on Gaza, two friends live as one when facing their everyday challenges giving each other support and motivation 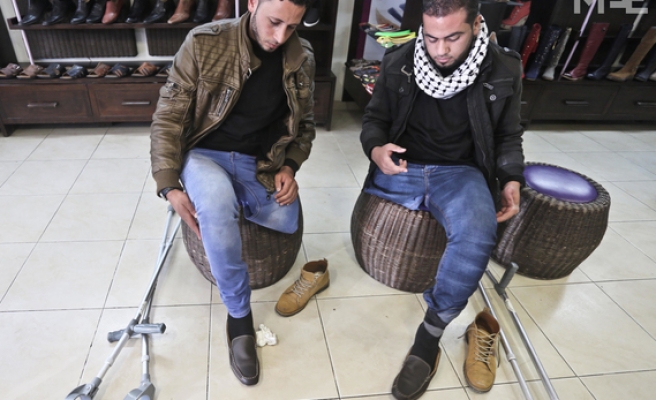 Adli Ebied and Mansour al-Qerem live in Shejayeh, west Gaza City, an area that was destroyed during the Israeli attack on the blockaded strip of land. With spring in the air both are looking for a new pair of shoes. Both of them walk into a store aided by crutches, and try on the latest styles - luckily they both have the same taste in shoes making their selection a lot easier. Deciding on a pair, one takes the left shoe, while the other takes the right. They also wear the same size in shoes.

Adli, 24, and Mansour, 26, share a special friendship: they both lost a leg during the Israeli attacks on Gaza in 2011.

Although they were not together when they were injured their recovery and rehabilitation has led to a unique friendship. Day by day they have gained strength from each other and share a gratefulness of simply being alive.

Despite Gaza's challenging conditions it has not stopped them from living life -  they enjoy eating, shopping, relaxing, running errands and riding their motorcycle together.

Though from different economic backgrounds, their friendship began at school, has continued through adulthood and is now stronger than ever due to the similar circumstances that life has thrown their way.

“A perfect moment to sense real friendship can just be in a shoe shop, where Mansour and I immediately agree on the same taste and type of shoe,” Adli says smiling.

Despite their injuries, they have overcome the negativiy keeping their spirits high and their sense of humour intact which for them causes one to barely notice their physical challenges.

The friendship makes it easy for them both to forget that each has lost a leg. “My other leg is over there,” smiles Adli, pointing to Mansour. Mansour smiles back, responding: “Yes, and that’s my other leg (pointing to Adli) and I can’t even think of going anywhere without it, or without Adli.”

“Our friendship is stronger after the shared pain we have endured,” says Mansour, with a wide smile.

“Together we are much better than before we were injured,” says Adli.

“My dream now is to have a job that can get me and my friend Mansour to the same good place,” he smiles as they sit side by side leaning against a fishing boat.

Joking with Adli, Mansour pauses for a moment. “So is that the only dream? Tell him what you told me?” he says with a shy smile, followed by laugher.

“Despite the pain, my other hope is to marry a good woman and build my own family,” he says.

Mansour, lost his left leg in an attack in August the same year. He had visited his friend in hospital and had said to him “Take my legs, my dear friend, but recover, be well,” not knowing that a few months later in the same year, he would also lose a leg also.

The injuried have brought a unique bond to the men. “We share everything and split expenses - after all, we are one soul, with two bodies,”

Despite the challenges, Mansour still wanted to get married, and now that he is married, he says he feels so much joy with his wife, Neda.

Neda is expecting a baby in four months, and is happy that her husband is able to have the support he needs through his friend Adli.

“Through pain, we are able to find joy, by sharing all we have, and continuing to care for one another,” says Mansour.