Israel banned pro-Palestinian US and European activists from trying to cross into the occupied West Bank to deliver aid to students. 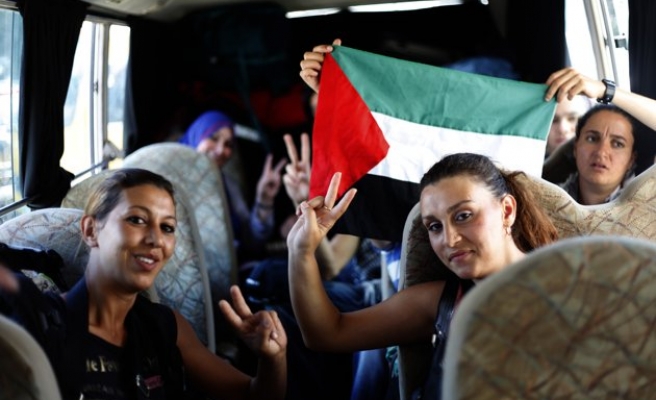 Israel on Sunday banned pro-Palestinian US and European activists from trying to cross into the occupied West Bank to deliver aid to students.

French organizer Olivia Zemor of the "Welcome to Palestine" campaign said Israeli authorities asked no questions and stamped "entry denied" into the passports without an explanation.

As part of the campaign, aimed at highlighting Israel's control over entry to the occupied territories, the activists sought to provide Palestinian students with a tonne of toys, pens, notebooks and other supplies.

"This is our fourth initiative to enter Palestine," Zemor told a news conference before leaving for the crossing, around 35 kilometres (20 miles) southeast of Amman.

"We have around 100 participants, from France, Belgium, Spain, Switzerland, the United States, aged between 10 and 50. All kinds of people, from all backgrounds and religions. They are all motivated to visit Palestine."

Five school buses drove the activists to the crossing as they chanted "Free Palestine!" and sang Palestinian traditional songs. Some wore T-shirts with "I have a dream" printed on them, while others flashed V-for-victory sign.

The campaigners tried to enter the occupied West Bank through Israel in July 2011 and April 2012, but the authorities at Tel Aviv's Ben Gurion airport denied them entry.

The activists, who had planned to stay for a week in the West Bank, say their mission comes at the invitation of Bethlehem governor Abdel-Fatah Hamayel.

Zemor said the activists want Israel to grant freedom of movement to the Palestinians and their visitors. Some also demand the lifting of an Israeli blockade on Gaza. She said the group, ranging in age from 10 to 80, was peaceful and unarmed.

She said a few of the protesters tried crossing the bridge but were ordered back to Jordan. She said buses ferrying the protesters were escorted in the direction of the Jordanian capital, Amman, by Jordanian anti-riot police and other security personnel.

The group said it hopes to visit a Palestinian refugee camp near Amman.