Israel destroys Bedouin village in Negev for the 79th time

Israel once again has forced its bulldozers, razing a Bedouin village on the pretext that it has been built illegally. 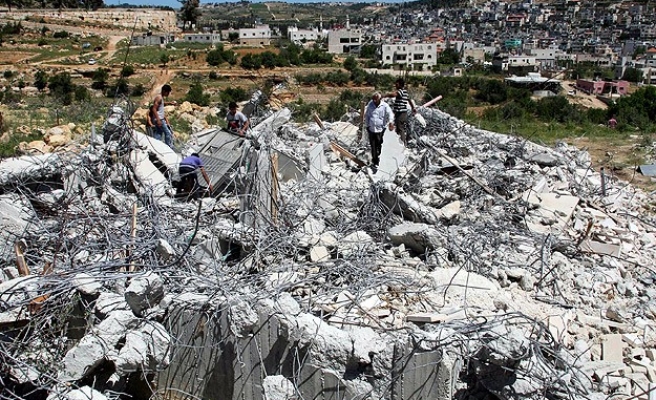 Israeli bulldozers on Monday backed by Israeli forces destroyed the Bedouin village of Al-Araqib in the Negev Desert for the 79th time in the last four years on the pretext that it had been built illegally, a local activist has said.

"Ten Israeli bulldozers forced their way into the village under the protection of dozens of Israeli forces," Attia al-Asam, who heads the regional council of unrecognized Bedouin communities in the Negev, an NGO, told The Anadolu Agency.

"They began destroying houses and structures without allowing residents to take their belongings," he added.

"They destroy our village again and again, and we rebuild it again," he told AA.

"For the last four years, they have been trying to exile us from our land by demolishing our homes," he said. "This policy will not make us leave."

Dozens of Palestinians, all of whom bear Israeli citizenship, live in Al-Araqib. They say that they have owned the land since before Israel came into being in 1948.

The village was demolished for the first time in July 2010, before being rebuilt with metal and wood.

Claiming that most land in the Negev Desert is "state property," the self-proclaimed Jewish state has repeatedly demolished Bedouin homes in the area.

There are around 1.6 million Arabs in Israel, accounting for around 20 percent of the country's population, according to official Israeli figures.