Palestinian homes have been destroyed as clashes escalate throughout West Bank and East Jerusalem. 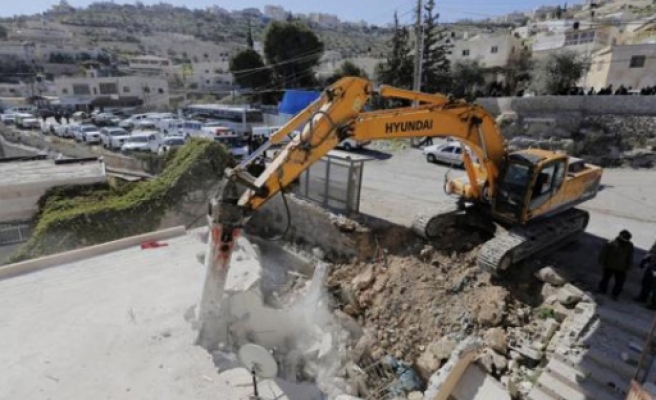 Israel destroyed the homes of two Palestinians involved in attacks on Israelis more than a year ago.

The Israeli military on Tuesday confirmed the punitive move against the Palestinians, both killed during the attacks in August and November 2014, which has come at a time of heightened tension between Palestinians and Israeli security forces.

Israeli forces continued to use live fire, rubber-coated bullets and tear gas in overnight clashes across the West Bank and East Jerusalem, as Palestinian youth protested the killing of two teens, aged 13 and 18, who were shot by Israeli forces on Sunday night.

The Palestinian Red Crescent said Monday that 500 Palestinians had been injured in clashes since Saturday.

Israeli police spokesperson Micky Rosenfeld also confirmed that a Palestinian youth was taken to the hospital in serious condition after being shot during clashes in East Jerusalem's Shu'fat neighborhood during the day.

Hostilities have increased since last Thursday, when an Israeli settler couple were shot dead in the West Bank. Since then, two more Israelis have been killed in Jerusalem and four Palestinians have been killed by Israeli forces.

The Israeli forces also announced in a statement Monday that they had arrested five people for killing the Israeli settler couple in the West Bank, claiming they were all part of a Hamas cell.

Though an almost unprecedented ban on Palestinians entering Jerusalem’s historic Old City expired Tuesday, Al-Aqsa Mosque, the third holiest site in Islam, continued to be off-limits to men under 50.

The restrictions on entering the mosque, which have continued with small breaks since Sep. 13, have become a source of anger amongst Palestinian youth, who see the ban as an infringement on their religious rights.

Israel has been increasingly tightening security measures, with Prime Minister Benjamin Netanyahu saying after a security meeting Monday that thousands more police had been stationed in Jerusalem and four army batallions had been sent to the West Bank.

A day earlier, he announced that Israel would destroy more homes of Palestinians linked to attacks on Israelis, expand the use of administrative detentions and give lifetime bans on entering Al-Aqsa.

Palestinians have called for support from the international community against what Hanan Ashrawi, a leading member of the Palestine Liberation Organization, called a “deliberate escalation by Israel” and “collective punishment” of Palestinians.

Israeli human rights group Yesh Din reported Monday that since the killing of two settlers in the West Bank on Thursday, there had been dozens of settler attacks on Palestinians across the West Bank. The settlers, often reportedly accompanied by Israeli soldiers, blocked roads, stoned Palestinian homes and burned vehicles and land.