Israeli army stormed Askar refugee camp in the northern city of Nablus and detained four members of Abu Hashiya's family, including his father 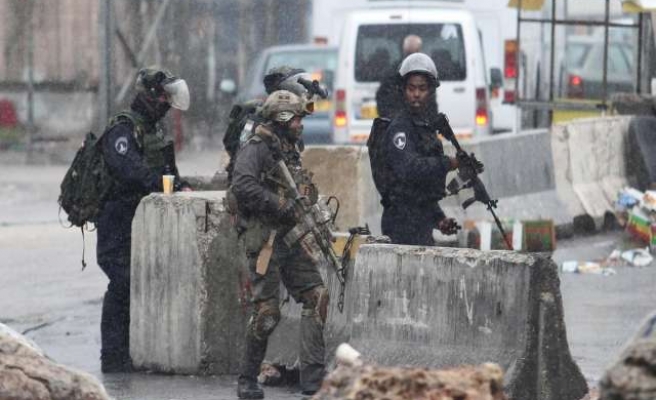 Israeli forces detained ten Palestinians in the early hours of Tuesday in a crackdown in the occupied West Bank, eyewitnesses said.

Four of the detainees were relatives of Nour al-Din Abu Hashiya who fatally stabbed an Israeli soldier in Tel Aviv on Monday, eyewitnesses said.

According to the witnesses, the Israeli army stormed Askar refugee camp in the northern city of Nablus and detained four members of Abu Hashiya's family, including his father.

Five other Palestinians were detained in the southern city of Hebron, including two brothers of another Palestinian who stabbed three Jewish settlers in the West Bank's Alon Shvut junction on Monday. One of three settlers attacked had later died of her wounds.

Tension has been running high in the region since Israeli authorities sealed access to the Al-Aqsa Mosque complex in occupied East Jerusalem after the shooting of an extremist Jewish rabbi in the city before reopening it hours later.

The unrest mounted further after Israeli forces killed a young Palestinian man suspected of shooting the rabbi in a raid last week on his East Jerusalem home.

Dozens of Palestinian female students suffered temporary asphyxiation on Monday in a school in the West Bank town of Deir Abu Mash'al after inhaling teargas fired by Israeli security forces.

Israeli security forces raided the town and shot teargas at the school without any provocation, leaving dozens of female students suffering temporary asphyxiation.

The girls were treated in the town's medical center, eyewitnesses said.

Deir Abu Mash'al has recently witnessed several raids by the Israeli army, which says it is searching for Palestinians who have thrown rocks at Israeli vehicles.

Meanwhile, Israeli army vehicles and bulldozers on Monday staged a limited incursion into the southern Gaza Strip for the fifth time since the announcement of an August 26 cease-fire between Palestinian resistance factions and Israel.

Four bulldozers from Israel's Kissufim military base pushed some 150 meters into northern Khan Younis, according to eyewitnesses.

The bulldozers leveled a large plot of agricultural land before pulling out of the area, witnesses added.

The incursion was the fifth since Israeli and Palestinian negotiators signed an August 26 cease-fire deal in Cairo, ending Israel's a seven-week military onslaught on the coastal enclave.

The Israeli offensive, which lasted from July 7 to August 26, left 2,160 Palestinians dead – the vast majority of them civilians – and more than 11,000 injured.