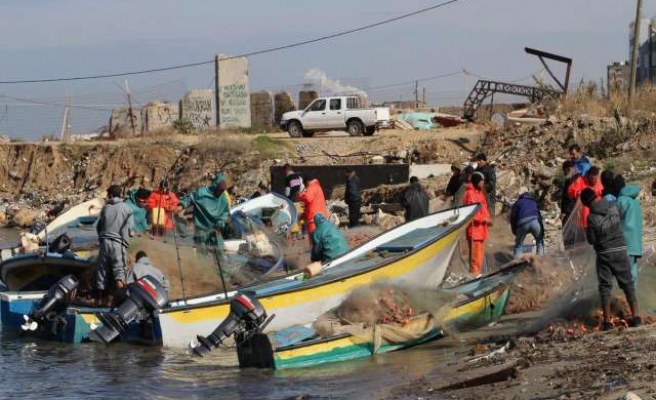 World Bulletin / News Desk
The Gaza workers' union denied on Thursday that three Palestinian fishermen currently being held by Israel were linked to Hamas or any other Palestinian resistance group.

"The fishermen being held by Israel have no affiliations with the resistance or any resistance activities," union head Sami al-Amasi said Thursday.

The Israeli army announced last night that its naval forces had detained three "Hamas members" last month who had attempted to "smuggle" fiberglass from Egypt's Sinai Peninsula to use in manufacturing rockets.

The Israeli army added that the three Palestinians had confessed to the charges and that they would be referred to trial in Israel.

Hamas, for its part, has yet to comment on the Israeli army's assertions.

"The fiberglass was intended for use making fishing boats," al-Amasi asserted.

Nizar Ayyash, head of the Gaza fishermen's union, told The Anadolu Agency that fiberglass was "essential" to the manufacture of boats and ships.

Israel, he explained, had prohibited the entry of fiberglass into the Gaza Strip for over seven years under a draconian blockade – by air, sea and land – of the coastal enclave.

According to the fishermen's union, the Israeli authorities have detained 40 Palestinian fishermen since last August, some of whom were held for several days before being released.

The Israeli navy routinely shoots at Palestinian fishing boats on the pretext that they are fishing in unauthorized waters.

Last summer, Israel allowed Palestinian fishermen to ply their trade up to six nautical miles off the coast of the Gaza Strip – up from only three miles previously.

A cease-fire reached last August between Israel and Palestinian factions ended 51 days of relentless Israeli attacks on the Gaza Strip, which killed over 2,160 Palestinians.

According to Ayyash, some 50,000 Gazans earn their living through fishing.

Ever since Hamas – which Israel deems a "terrorist" organization – won Palestinian legislative polls in 2006, the self-proclaimed Jewish state has imposed a tight blockade on the Gaza Strip.