A historic Palestinian village that has the shrine of Prophet Samuel, is isolated by Israel who have put checkpoints at the village exits - the historic village whose houses have been demolished with only shanty building remaining for the Palestinians who have stayed behind. 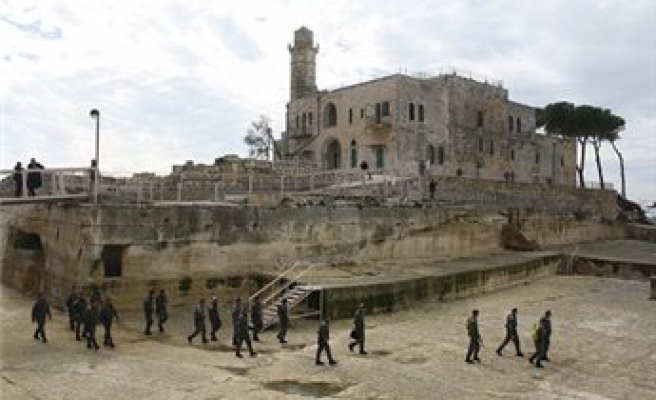 The tomb of the Biblical prophet Samuel is blessed with a stunning view over Jerusalem from its perch four kilometers north of the Old City.

Long an important lookout, the shrine and the village that grew up around it -- today known simply as "Nabi Samuel," or "The Prophet Samuel" -- was even briefly named "Mount of Joy" by the Crusaders, as the site provided their first glimpse of the Jerusalem Basin.

However in a report for Maan News Agency, the Palestinian residents living in Nabi Samuel today, the incredible vista is bittersweet, offering them visual access to a holy landscape that they are forbidden by Israeli authorities from actually visiting.

Trapped by a Jewish-only settlement on one side and the Separation Wall on the other, locals are forced to apply for permits to leave the village and can be sent to jail if they walk too far off the hill in any direction.

While the shrine has become a popular tourist site for Israelis as well as Jews from all over the world, the Palestinians whose lives have long been intertwined with this holy place remain trapped, prisoners in the invisible cage that surrounds them.

In the early 1970s, Israeli authorities demolished the historic village that used to surround the shrine, leveling home after home in a bid to ensure none of the refugees could return. The few dozen villagers who had remained, meanwhile, were forced to move into a handful of ramshackle homes a little bit further down the hill.

For many of the tourists who come, the Palestinians are interlopers and invaders on the Jewish homeland, despite the fact that few Israeli Jews trace their ancestry in the Holy Land back more than a couple of generations.

Local resident Eid Barakat told Ma'an that the only way in and out of the village is through an Israeli military checkpoint to nearby Bir Nabala, but that villagers could be arrested or fined if they went anywhere without prior authorization.

The Israeli settlement of Ramot, less than two kilometers away and clearly visible from the shrine, is completely off-limits, as is the rest of Israeli-occupied Jerusalem.

Israel's construction of the Separation Barrier around Nabi Samuel has compounded residents' misery. The village is located in the "Seam Zone" on the "Israeli side" of the wall.

The United Nations estimates that in total 50,000 Palestinians are stuck in the zone, confined to small enclaves with limited access to their farm lands and neighboring villages.

Because the residents of Nabi Samuel have West Bank identity cards, they are forbidden by Israeli military authorities from leaving the village in any direction without authorization.

Israeli has completely isolated the villagers, with Barakat saying that the Israeli military refuses to allow other West Bankers to visit them through the checkpoint. As a result, local families are forbidden from inviting friends or relatives to visit.