Israel ground troops have been deployed around the Gaza Strip and would be ready to implement a possible order for a ground assault within hours of its issuance. 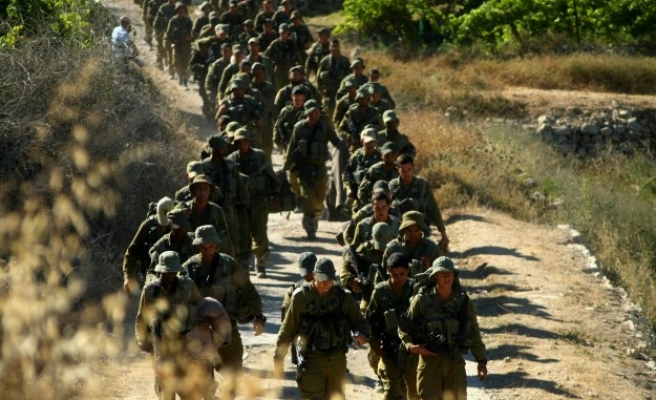 A "large" number of Israeli ground forces are on alert in case of an order to launch a ground incursion into the Gaza Strip, a spokesman for the Israeli army said on Thursday.

"There is a large mobilization of ground troops around Gaza, including infantry forces and tanks as well as combat engineering corps," Avichay Adraee, spokesman for the Israeli military to Arab media, told Anadolu Agency by phone on Thursday.

"The troops are on full alert and will be ready to conduct a ground intervention order within hours of its issuance," Adraee said.

Israel has launched an ongoing wide-scale operation in the Gaza Strip since late Monday, killing at least 75 and wounding over 530 with hundreds of airstrikes.

Ahead of the operation, the Israeli government approved the deployment of 40,000 ground troops on the Strip's border for a possible ground assault.

According to Palestinian security sources, Israeli warplanes have conducted more than 770 strikes against Gaza targets during the same period.

Half of Gaza fatalities women and children

Around half of Palestinians killed thus far in a fresh Israeli operation in the Gaza Strip are women and children, according to the latest estimates by the Palestinian Health Ministry on Thursday.

Twenty-three children and 12 women are among 75 Palestinians killed in Gaza since the beginning of a large-scale Israeli operation in the Strip late Monday, according to the health ministry's statement.

Earlier on Thursday, three Palestinians were killed and four other seriously injured when Israeli aircraft targeted a vehicle in eastern Gaza City, according to medical sources, which brought the death toll from the Israeli operation thus far to 75, according to an earlier statement by Palestinian Health Ministry Spokesman Ashraf al-Qodra.

Israeli troops on Thursday shelled Erez border crossing with the Gaza Strip, destroying it completely, according to a Palestinian official.

“Beit Hanoun crossing [also known as Erez] and all its facilities had been completely destroyed with eight shells fired from the Israeli troops,” Iyad al-Bozom, spokesperson of the Interior Ministry in the Gaza Strip, wrote on his Facebook page.

He went on to accuse the Israeli troops of "targeting and destroying the security headquarters in the enclave."

Erez Crossing, which is controlled by Israel, is frequently used for the movement of persons between the besieged Gaza Strip and the occupied West Bank.

The Israeli army is yet to comment on the allegation.