Israeli authorities usually open the floodgates to their dams, without prior notice in order to discharge the quantities of water that had accumulated due to the heavy rains in the region. 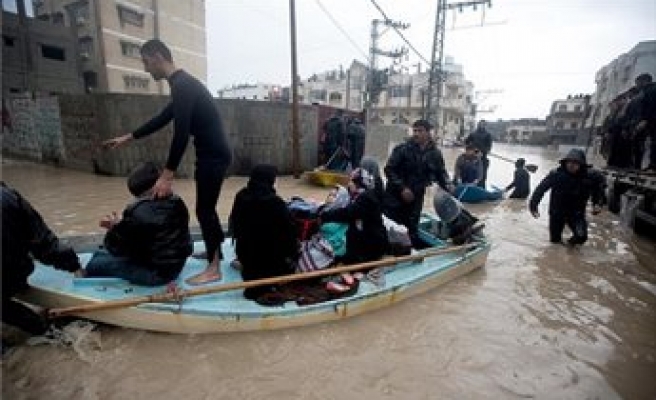 World Bulletin / News Desk
Israeli authorities have opened the gates of a dam near the Gaza Strip, which led to the flooding of several homes in the enclave, according to the strip's Civil Defense Directorate (CDD).

"The [Israeli] army opened the floodgates of a canal leading to central Gaza, which led to the removal of sand mounds along the border with Israel," Gaza's CDD said in a statement.

"Opening the levees to the canal has led to the flooding of several Palestinian homes, and we had to quickly evacuate the afflicted citizens," it added.

Medical sources told The Anadolu Agency that no casualties have been reported as a result of the flooding.

According to the CDD, Israeli authorities usually open the floodgates to their dams in the direction of the Gaza Strip - without prior notice - in order to discharge the enormous quantities of water that had accumulated due to the heavy rains in the region.

The Gaza Strip is struggling to deal with a severe snowstorm that has been sweeping across several Middle Eastern countries since Tuesday.

The Israeli blockade of Gaza, in place since 2006, has led to shortages in fuel and rainwater drainage equipment, which further exacerbated the situation of the 1.9 million Palestinians in the strip.