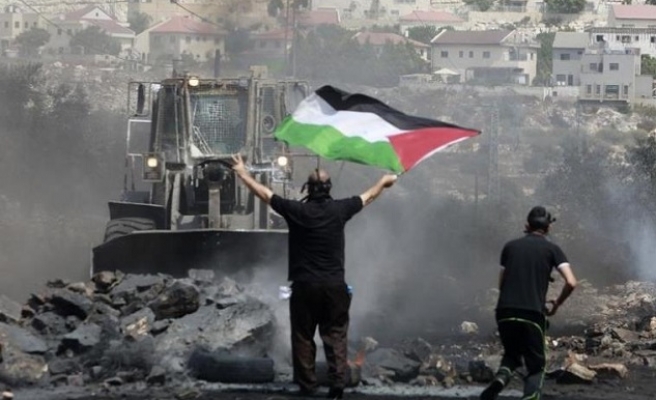 Israeli authorities want to expel some 10,000 Bedouin residents of the E1 Zone in the occupied West Bank in advance of building a bloc of Jewish-only residential units linking Jerusalem to the Ma’ale Adumim settlement, according to a Palestinian expert on Israeli settlement policy.

"Planned Israeli settlements in E1 will effectively cut the West Bank in half and prevent the territorial contiguity of a future Palestinian state based on the 1967 borders," Ahmad Sob Labn told Anadolu Agency.

The E1 Zone sits on roughly 15 square kilometers of land northeast of Jerusalem.

"Once Israel builds a new settlement bloc there linking Ma’ale Adumim to Jerusalem, the holy city will be surrounded by settlements from all sides, completing Israel’s longstanding goal of establishing a ‘Greater Jerusalem’," Sob Labn said.

In December of last year, Peace Now, an Israeli NGO, released a report based on Israeli government documents obtained through freedom-of-information laws.

According to the report’s findings, the Israeli Ministry of Construction and Housing has secretly hired architects for a settlement project -- without going to public tender -- near the Ma’ale Adumim settlement.

Ahmed Qurei, who is responsible for the Jerusalem file at the Palestinian Liberation Organization, told Anadolu Agency that Israeli authorities "seek to surround East Jerusalem, cutting it off from the rest of the West Bank".

Qurei accused Israel of seeking to impose a "fait accompli" by linking the Ma’ale Aodumim settlement to East Jerusalem "by building thousands of new settlement units, factories and hotels in E1".

Such a move, he asserted, would allow Israel to kill two birds with one stone.

"It will annex East Jerusalem to Israel and cut the West Bank in two, thus destroying the viability of a future Palestinian state [on the 1967 borders]," he said.

"Two bulldozers, backed by Israeli military vehicles and about 50 soldiers, stormed Jabl al-Baba at dawn and demolished three houses, leaving 17 people -- half of whom were children -- without shelter," local resident Attalah Mazaraa told Anadolu Agency. "They surrounded the area, forced the people outside their homes, and razed the structures without any warning."

Jabl al-Baba is currently populated by some 300 Palestinian Bedouins who were displaced from their original homes in the Negev Desert by invading Jewish forces in 1948.

According to Mazaraa, the demolished homes had been donated to Jabal al-Baba’s Bedouin community by the European Union.

Jabal al-Baba resident Ghassan Jahaleen told Anadolu Agency that the Israeli army had destroyed his mobile home, leaving him and eight members of his family out in the cold.

"The Israeli government thinks its home-demolition policy will force us to leave," he said. "But they’re mistaken. We’ll never leave our land."

Notably, the demolitions occurred only one after Israeli daily Haaretz reported that the EU may demand compensation from Israel for the demolition of homes it had donated to Palestinian communities.

An ongoing diplomatic row between the EU and Israel came to a head last week when the EU’s Foreign Affairs Council adopted a resolution describing Israeli settlement policies as "illegal" and "injurious" to a future two-state solution.

International law views the West Bank and East Jerusalem as occupied territories and considers all Jewish settlement building on the land to be illegal.

About 500,000 Jewish settlers currently live on more than 100 Jewish-only settlements built since Israel occupied the West Bank and East Jerusalem in 1967.

The Palestinians want these areas, along with the Gaza Strip, for a future state of Palestine.

Palestinian negotiators, however, insist that Israeli settlement building on Arab land must stop before a comprehensive peace agreement can be reached.