"Israel is preparing a legal groundwork to demolish Al-Aqsa Mosque and want to erect a statue of Suleiman in its stead," said Qari. 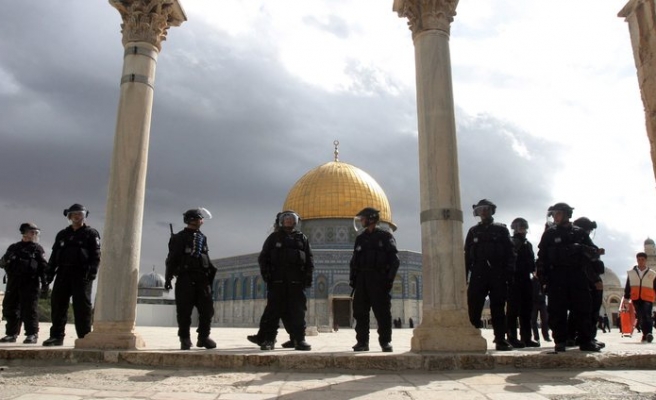 The Secretary General of the Organization of Islamic Cooperation (OIC), Prof. Ekmeleddin Ihsanoglu, condemned on Wednesday the Israeli government's claims on Al-Aqsa Mosque.

"The Muslim Ummah shall not accept any attack against al-Aqsa Mosque which is one of the holiest sanctities of Muslims, the destination of Prophet Muhammad in his journey and Muslims' first Qibla," said Ihsanoglu in a statement released on Wednesday.

Ihsanoglu called on the ambassadors of the Islamic group to the UNESCO to act urgently and exert every possible effort to stop Israeli attacks on religious and cultural places in the occupied Al-Quds City.

Ihsanoglu also warned of the effects of such allegations as they pave the way for further attacks on the blessed Al-Aqsa Mosque.

Speaking to Anadolu Agency (AA) correspondent on Wednesday, Qari said that Israel was planning to destroy their sacred places in the holy city.

"Israel is preparing a legal groundwork to demolish Al-Aqsa Mosque and want to erect a statue of Suleiman in its stead," said Qari.

Abdul Rahman Abbad, the head of Muslims scholars council in Jerusalem, told Ma'an news agency: "Muslims are the only ones who own this mosque."

He insisted religious authorities are not bound by Israeli decisions, and warned of Israel's intentions in issuing such a statement ahead of the holy month of Ramadam, when Muslims flock to the Haram al-Sharif.