In a statement, the police said that three of the detainees were captured after throwing stones at an Israeli train that passes through their Shuafat neighborhood. 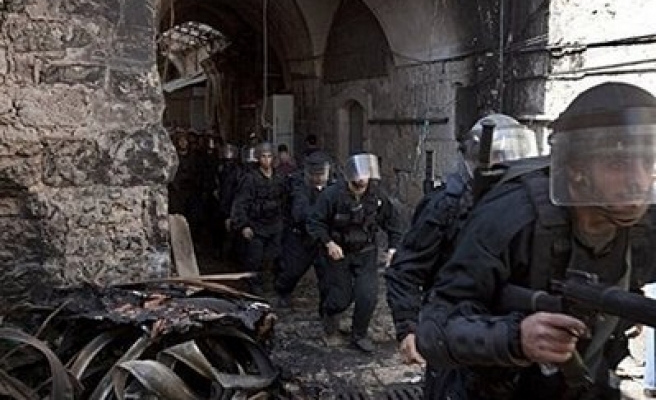 Israeli police said Tuesday that it had detained 22 Palestinians, including 13 minors, during overnight raids in Jerusalem on rioting charges.

In a statement, the police said that three of the detainees were captured after throwing stones at an Israeli train that passes through their Shuafat neighborhood.

Four others had been detained for throwing Molotov cocktails at Israeli security troops in the city and three minors from Silwan neighborhood over throwing petrol bombs in Al-Thawri district.

The statement did not state why the remaining detainees were held.

In an earlier statement, the Israeli police said that it detained five youths from the holy city after hurling Molotov cocktails at houses of Jewish settlers.

Meanwhile, the Israeli army said it detained 10 "wanted" Palestinians during overnight raids in the West Bank and referred them to interrogation.

Seven of the detainees, it tweeted, are suspected of involvement in riots against Israeli settlers and troops.

The army gave no further details.

They have detained hundreds of Palestinians since the disappearance and subsequent killing of three Jewish settlers in the West Bank in mid-June.

Several Hamas lawmakers, former ministers and dozens of detainees -who had been released as part of a 2011 prisoner swap between Hamas and Israel – have since been detained.

The number of Palestinians currently detained by Israel has recently risen to a whopping 7,000, according to the Palestinian Ministry for Prisoners Affairs.