Two Palestinians were injured by rubber bullets when Israeli police prevented Hamas members from holding a rally in the West Bank. 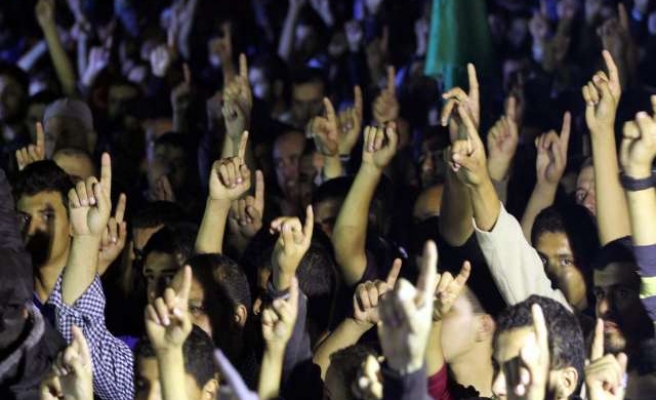 World Bulletin/News Desk
Two Palestinians were injured by rubber bullets on Friday after Israeli forces forcibly prevented members of the Palestinian Hamas movement from holding a rally in the West Bank city of Hebron.

Israeli forces raided the rally venue in southern Hebron Friday afternoon, destroying a podium set up to commemorate the passage of 27 years since the resistance group's foundation, eyewitnesses told The Anadolu Agency.

Israeli forces also violently dispersed a demonstration staged by Hamas members outside a mosque near the rally venue and prevented would-be demonstrators from reaching the site, eyewitnesses said.

The two injured Palestinians – along with dozens of others who suffered teargas inhalation during the protest dispersal – were treated at the scene, eyewitnesses said.

Israeli authorities could not be immediately reached for comment.

Hamas had invited its supporters in the West Bank to take part in a ceremony on Friday to commemorate the movement's establishment 27 years ago – amid the first Intifada, or Palestinian uprising – by Sheikh Ahmed Yassin.

Yassin was a Palestinian popular resistance icon who was assassinated by Israel in 2004.

Khaled Meshaal, the group's Qatar-based chief, had been scheduled to give a live-broadcast speech at Friday's commemoration rally.

According to Hamas, Palestinian Authority security forces set up barricades around the rally venue and arrested a number of Hamas members prior to the event.