Lieberman and around two dozen Yisrael Beytenu supporters raised cartoons ridiculing Islam's Prophet Muhammad as an act of protest against the ban. 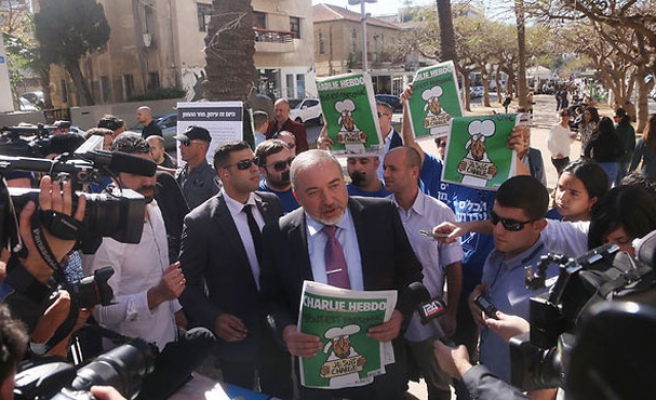 Israeli Foreign Minister Avigdor Lieberman – along with dozens of supporters of his right-wing Yisrael Beytenu party – gathered in Tel Aviv on Thursday to protest a ban on the distribution by his party of controversial French magazine Charlie Hebdo.

"I lament that we are forced to try to preserve freedom of expression in the state of Israel in this way," Lieberman was quoted as saying during the protest by Israeli daily Yedioth Ahronoth.

"Prohibiting us from distributing this magazine is simply surrendering to extortion and intimidation," he added, referring to a decision by the country's Central Election Committee to disallow the party from distributing copies of the satirical magazine.

Lieberman and around two dozen Yisrael Beytenu supporters – who had gathered on Tel Aviv's Rothschild Boulevard – raised cartoons ridiculing Islam's Prophet Muhammad as an act of protest against the ban.

The suspected perpetrators – Said and Cherif Kouachi, two brothers of Algerian descent – were both killed by police two days later in a small town north of Paris.

Israel's Central Election Committee on Wednesday issued a decree against a plan by Lieberman's party to distribute copies of the magazine after Arab parties filed a complaint against the planned move.

Arab lawmaker Ahmad Tibi, who was among the complaint's signatories, described the committee's decision as a "victory."

"It is a legal precedent and big victory for us against extremism," Tibi told.