A Palestinian woman was injured in her leg with a rubber bullet and five Palestinians suffered suffocation from teargas inhalation. 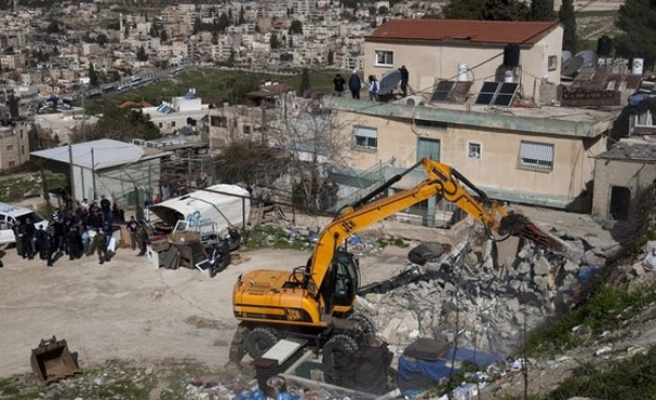 Israeli bulldozers early Tuesday demolished a house under construction owned by a Palestinian man in Isawiya neighborhood in occupied East Jerusalem, under the pretext of having been built without permit.

"Three Israeli bulldozers under the protection of Israeli forces stormed the neighborhood at dawn and start to demolish the house immediately, without any warning," the house owner, Osama al-Dare, told The Anadolu Agency.

"The building process has started one year ago on an area of 170 square meters," he added.

After the demolition, clashes erupted between young Palestinians and the Israeli forces.

"A Palestinian woman was injured in her leg with a rubber bullet and five Palestinians suffered suffocation from teargas inhalation," he added.

Palestinians have long complained that the Israeli municipal authorities impose tight restrictions on the construction and renovation of Palestinian homes in the flashpoint city.

Sacred to both Muslims and Jews, East Jerusalem is home to the Al-Aqsa Mosque, which for Muslims represents the world's third holiest site. Jews refer to the area as the "Temple Mount," claiming it was the site of two prominent Jewish temples in ancient times.

Israel occupied the city along with the West Bank during the 1967 Middle East War. It later annexed East Jerusalem in 1980, claiming the city as the capital of the self-proclaimed Jewish state in a move never recognized by the international community.

Palestinians, for their part, accuse Israel of waging an aggressive campaign to "Judaize" the holy city with the aim of effacing its Arab and Islamic identity.