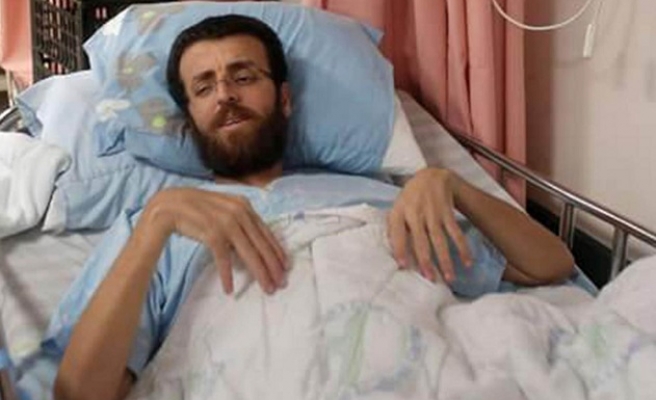 The Israeli Supreme Court on Tuesday refused to transfer jailed Palestinian journalist Mohammed al-Qeeq, who began an open-ended hunger-strike 85 days ago, to a Palestinian hospital in the Israeli-occupied West Bank, a Palestinian official has said.

"The Israeli court rejected the request, submitted by Mohammed, to be moved to one of the Palestinian hospitals in West Bank for treatment," Issa Qaraqe, head of the Palestine Liberation Organization (PLO)'s committee on detainees, said in a statement.

With its decision, Qaraqe said, the court had proven itself to be "a tool of the [Israeli] occupation".

"Even though the court knows al-Qeeq’s life is in danger, it did not take the decision to save it," he added.

Qaraqe went on to say that an Israeli medical committee had taken the decision to force-feed al-Qeeq and would likely do so within hours.

According to the PLO’s detainees committee, al-Qeeq’s health is deteriorating rapidly and he could suffer a brain stroke at any time.

Last week, al-Qeeq vowed to maintain his hunger strike despite an Israeli court decision to temporarily remove him from "administrative detention", which allows suspects to be held without trial or charge for renewable six-month periods.

"He [al-Qeeq] is suffering heart pain, muscle cramps and significant increases in body temperature," the committee warned in a statement.

Originally from the West Bank city of Hebron (Al-Khalil), al-Qeeq, 32, had lived in Ramallah, where he worked for Al-Majd TV, a popular Arabic-language satellite television channel.

Al-Qeeq began his hunger strike on Nov. 24, 2015 -- three days after being arrested by Israel for alleged "incitement" -- to protest his ongoing detention without trial.

In response to Tuesday’s court decision, Sheikh Raed Salah, leader of the northern branch of the Islamic Movement in Israel and an outspoken critic of the Israeli occupation, began his own hunger-strike.

"I’m starting an open-ended hunger strike in solidarity with al-Qeeq," Salah declared Tuesday from the same hospital in the northern Israeli city of Afula in which al-Qeeq is being held.

"Mohammed al-Qeeq stands between life and death; we will not give up on him at this critical time," he said.

"We fear the Israeli doctors may force-feed Mohammed at any time," he said.