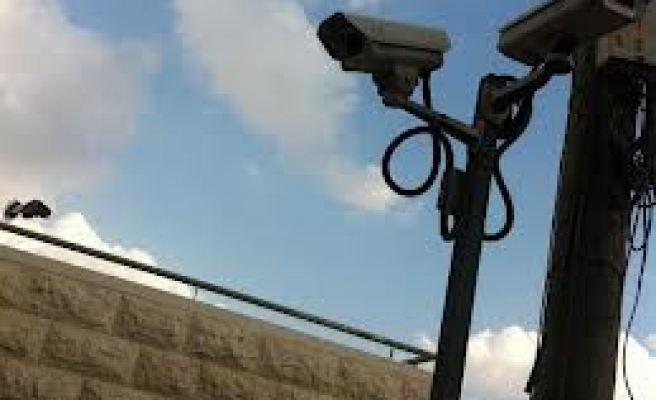 Israeli policemen and prosecutors use footage by cameras fixed at the gates of al-Aqsa Mosque as evidence for incriminating the Palestinians who enter the prayer house before and during raids by Jewish settlers on the mosque, a Palestinian lawyer told Anadolu Agency.

Tahseen Obwany said Israeli police had to use footage by these cameras to incriminate Palestinians who were present during the confrontations that erupted at al-Aqsa mosque last Wednesday and Thursday.

He said Israeli authorities had already used footage from al-Aqsa mosque cameras to arrest one of his clients at the Qalanda checkpoint, south of Ramallah, on charges of confronting Israeli settlers.

People snapped by the cameras are not arrested immediately, Obwany said, but they are placed under watch from Israeli authorities for some time until necessary information is collected.

The lawyer revealed that Israel had already deployed hundreds of cameras around al-Aqsa mosque and at its gates to monitor the movement of the Palestinians there.

Al-Aqsa mosque has been the target of recent violations by Israeli settlers almost on a daily basis under the protection from Israeli policemen and army personnel.

Al-Aqsa Foundation for Endowment and Heritage had earlier warned against what it described as an Israeli plan to divide the mosque between Muslims and Jews.

Muslims have fears that the scenario of al-Haram al-Ibrahimi will be implemented in al-Aqsa mosque, when Israel divided the mosque between Muslim and Jews following the killing of 29 Muslims by an Israeli radical in 1994.

Israelis, especially religious are hardly even admitted to the temple mount. Jews are forbidden to give any signs of prayer and are actually advised by Israeli security to pray silently not even moving to bow as jews do during prayer. All this to not sparkle sensitive muslim soulsOn the same time, muslim youth routinely throw stones at policemen and other security personnel after Friday prayers