A group of 150 Israeli Jews have entered the al-Aqsa Mosque in Jerusalem alongside Israeli forces. 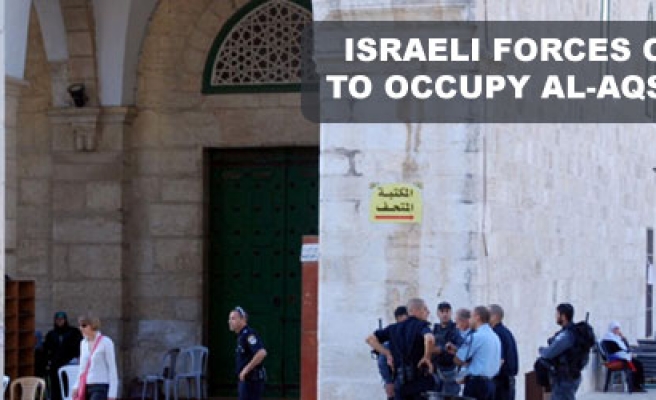 More than 150 Jewish settlers on Monday morning broke into the compound of Al-Aqsa Mosque in the city of Al-Quds (Jerusalem) as Israeli soldiers looked on, according to the Aqsa Foundation for Endowment and Heritage.

Jewish settlers burst into the mosque compound through the Magharba Gate, the foundation -- devoted to protecting Al-Aqsa's Arab and Islamic identity -- said in a statement obtained by the Anadolu Agency.

They settlers were protected by Israeli special forces, the foundation stated, adding that they had toured the mosque compound in the company of a handful of Jewish rabbis.

"The settlers performed Jewish and Talmudic rituals in different parts of the compound, particularly near the Rahma gate," the foundation added.

Israeli special forces usually form human barriers to protect Jewish settlers whenever the latter enter the Aqsa compound to separate them from Palestinian Muslims present at the mosque.

According to the foundation, Yehuda Glick, head of the Temple Mount Heritage Foundation, was among the party of Jews who entered the mosque complex on Monday.

Glick, the foundation statement read, had been accompanied by about 20 settlers when he entered the mosque complex.

During their tour of the Aqsa compound, settlers listened to lectures on the history of the "presumed and imagined Solomon's Temple," the statement added.

The latest Al-Aqsa violations by settlers come as Jews celebrate the weeklong Sukkot holiday. The Knesset (Israel's parliament) had earlier called for opening the mosque compound to Jews on all Jewish holidays.

Jews refer to Al-Aqsa as the "Temple Mount", claiming the area was the site of two Jewish temples in ancient times.

I want Al Aqsa free for muslims to pray in