Waving Palestinian flags, the demonstrators chanted slogans against the Israeli evacuation of Palestinians from their land and homes in the area. 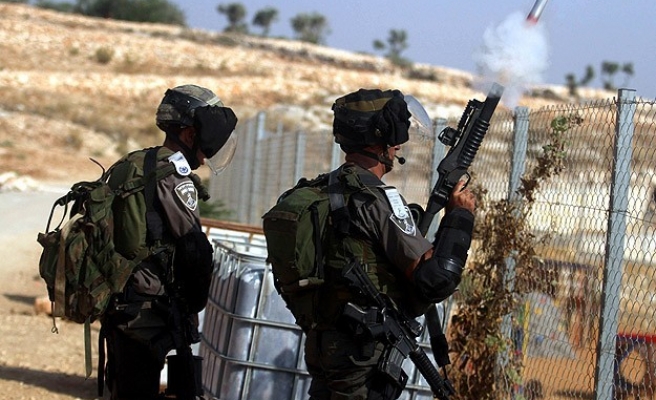 Israeli forces on Thursday dispersed a protest staged by Palestinian activists in Al-Quds (occupied East Jerusalem) against the confiscation of Palestinian land in what is known as E1 zone.

The protest, organized by the "Popular Initiative for Resisting the Barrier and Settlements" group, was staged in al-Ayzariya village near the Israeli settlement of Maale Adumim.

But protesters were prevented by Israeli forces from reaching the land that is at the risk of confiscation by Israeli authorities for building a new settlement, according to an Anadolu Agency correspondent.

On activist was arrested by Israeli forces.

Waving Palestinian flags, the demonstrators chanted slogans against the Israeli evacuation of Palestinians from their land and homes in the area.

Salah Khawaja, the deputy secretary-general of the organizing group, said the protest was staged in response to an attempt by Israeli settlers to break into the tent site of Bab al-Shams, which was established for several days in early 2013.

"The site is the first symbol of resistance against an Israeli plan to connect settlements around Jerusalem together and delink the old city from the West Bank," Khawaja told AA.

"We will continue our struggle against the Israeli occupation," he added.

AA could not get immediate comments from Israeli authorities.