Israeli police closed off a number of mosque gates and denied people under 50 access into the site. 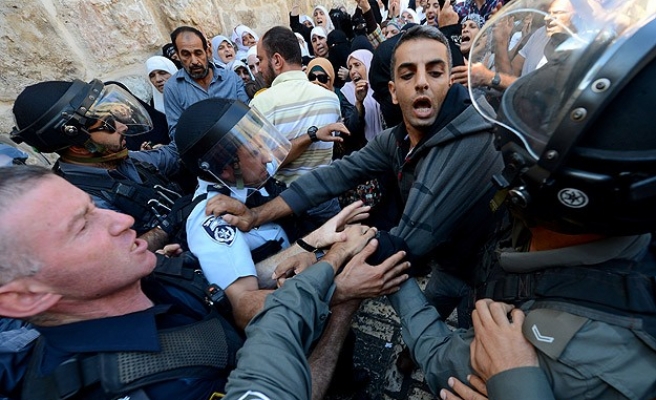 Clashes broke out Tuesday between Israeli police and Palestinian worshippers at an entrance to the Al-Aqsa Mosque compound following a decision by Israeli authorities to ban Muslim men under the age of 50 from entering the site, eyewitnesses said.

Israeli police, who were heavily deployed around the mosque compound's Bab al-Hatta Gate, fired stun grenades at Palestinians gathered outside and assaulted several of them, causing injuries, according to eyewitnesses.

At the same time, Israeli security forces allowed over 60 Jewish settlers to enter the mosque through the Bab al-Magharba Gate, according to both eyewitnesses and the Al-Aqsa Foundation for Endowment and Heritage, a Palestinian NGO.

The restrictive measures came hours before a planned march by Jewish extremist groups, scheduled to set out at 5:30pm from the mosque compound's Al-Khalil Gate.

Tuesday's planned march has sparked fears that extremist Jewish groups are planning to storm the holy site in large numbers.

For Muslims, Al-Aqsa represents the world's third holiest site. Jews, meanwhile, refer to the area as the "Temple Mount," claiming it was the site of two prominent Jewish temples in ancient times.