Israeli police have put in place an age restriction for Muslims in Jerusalem as well as limiting the slaughter of livestock to only a handful of "permitted" sites. 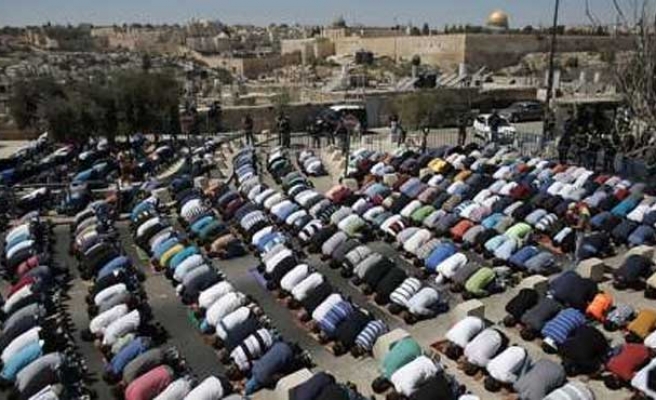 Thousands of Muslims gathered in and around the Al-Aqsa only one week after entry into the iconic mosque complex was restricted by the Israeli authorities amid violent clashes between Palestinian Muslim worshipers and Jewish settlers backed by Israeli security forces.

For the four-day Eid al-Adha feast, however, the Israeli authorities have eased restrictions on entry into Jerusalem for those coming from the occupied West Bank, allowing married Palestinian men over 45 and women over 30 to visit the mosque.

Many of those who came to Jerusalem to mark the first day of the Eid on Thursday were East African Muslims who work in the Israeli city of Tel Aviv.

Ammashe Haya, a 63-year-old Palestinian resident of Jerusalem, was one of those who came to the mosque with her family to mark the first day of Eid.

“I can't even describe it. I'm very happy. I wish this many people could come here every week,” she said.

Haya went on to complain about the Israeli restrictions on entry, which were imposed last week after extremist Jewish settlers – backed by Israeli security forces – forced their way into the flashpoint mosque complex on three consecutive days.

“Today is different; many people have been allowed inside [the mosque compound],” she said. “Usually, though, you will only see ten or 20 worshipers here because they [the Israeli authorities] don’t let us in.”

Some of the protesters waved the flags of the countries from which they came, including Turkey, Algeria, Iraq, and other Muslim countries.

During the Eid al-Adha, Muslims traditionally perform a ritual sacrifice, usually a sheep, goat or cow. Due to frequent Israeli restrictions in Jerusalem, however, residents must often travel to the West Bank for the slaughter.

Palestinians living in Jerusalem have been prevented from establishing livestock markets and the slaughter has been limited to "restricted sites".

Palestinians near Bethlehem, Ramallah, Jericho and Nablus leave their livestock in the gardens of friends and neighbours until the morning of the Eid.