Palestinian villages in the West Bank, especially those near Israeli settlements, have recently been subject to repeated assaults by Jewish settlers 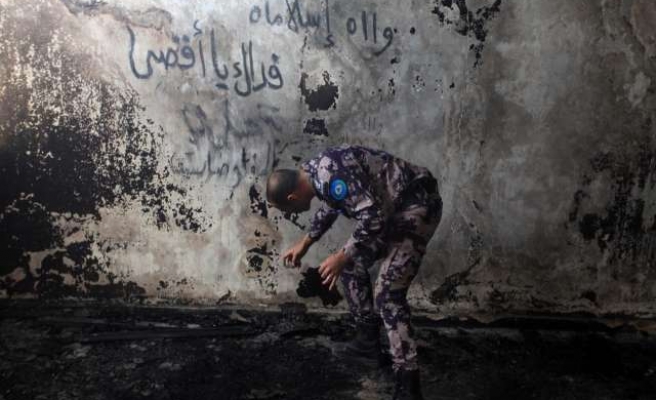 A house owned by a Palestinian family in Khirbet Abu Falah village near Ramallah was set ablaze early Sunday after Israeli settlers threw a petrol bomb inside it, the house's owner said.

"Death to Arabs" and another slogan calling for revenge were painted on the home, hallmarks of so-called "price tag" attacks by Jewish extremists against Palestinian dwellings and mosques and Christian church property.

"A group of settlers sneaked into the village at around 4am and tried to break into the house,"  Mohamed Abdel-Kareem, the owner of the house, told The Anadolu Agency.

"When the neighbors and the people of the house woke up, the settlers threw a petrol bomb inside it and ran away," he added.

The fire has damaged walls and several pieces of furniture, but no one was wounded, according to Abdel-Kareem.

A police spokesman said officers from the nationalist crimes unit were sent to the scene and had begun an investigation.

Palestinian villages in the West Bank, especially those near Israeli settlements, have recently been subject to repeated assaults by Jewish settlers, while the Israeli authorities continue to seize Palestinian lands for the purpose of expanding settlement activities.

Tension has already run high in the West Bank and East Jerusalem in recent months following Israel's 51-day military onslaught on the Gaza Strip, in which over 2,160 Palestinians – mostly civilians - were killed.

Since then, a total of 11 Israelis have been killed and several others injured in a spate of assaults by Palestinians, both inside Israel and in the occupied territories.