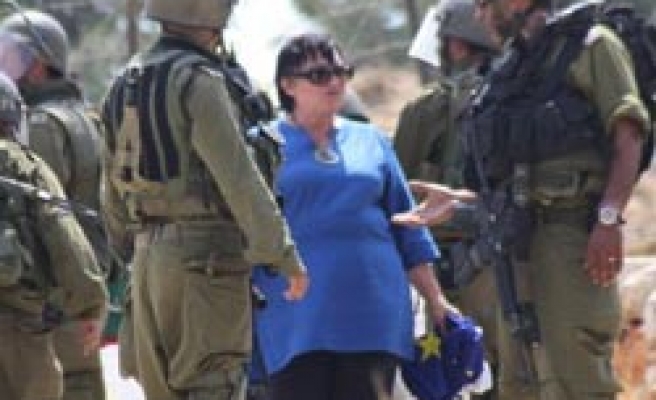 Israeli soldiers also injured one Israeli activist., and arrested another.

Sixty nine-year-old Morgantini, an Italian Member of the Euopean Parliament (MEP) Morgantini was leading a 50-strong Italian delegation at the weekly march from the village center to the separation wall, which cuts off residents from ancestral agricultural lands, Maan News Agency said.

She has participated several times in demonstrations in Bil’in and in June 2008 was injured when Israeli soldiers attacked a group of non-violent activists.

There were about 100 internationals supporting the peaceful Palestinian demonstratos, according to report.

Morgantini, who served as Vice President of the European Parliament between 2007 and 2009, was arrested during a demonstration in the West Bank town of Bil'in, CNN reported.

She was among roughly 200 demonstrators who were tear-gassed, according to a statement from the Popular Struggle Coordination Committee, an activist group involved with the protest.

One Israeli activist, Kobi Snitz, was arrested while trying to speak to the army in order to secure Morgantini’s release, Ramallah Online said.

According to Maann, after her release Morgantini said, "I saw Palestinians protesting nonviolently attacked by the army for trying to defend their lands. I strongly encourage the EU to take strong action for the protection of Palestinians and the implementation of their rights.”

Over the past five years, Bil'in has been home to weekly Friday protests opposing Israel's separation barrier, the 700-kilometer (400-mile) stretch of concrete wall and fence that separates Israel from the Palestinian West Bank.