The restrictions come as Israeli forces continued their ground assault on the Gaza Strip following eleven days of air and naval bombardment. 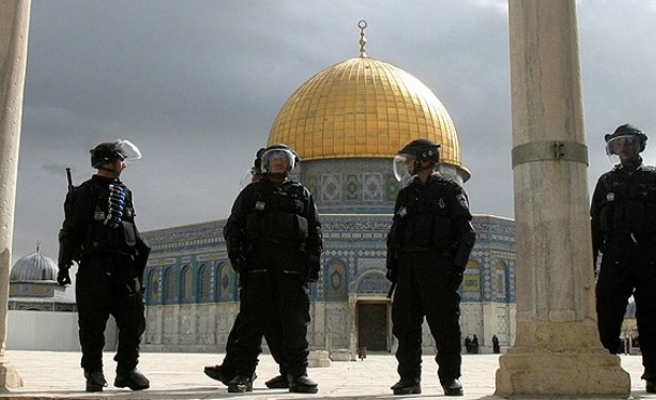 According to witnesses, Israeli security forces fired rubber bullets to disperse worshippers who were demonstrating against Israel's devastating military offensive against the blockaded Gaza Strip, now in its second week.

During the melee, Al-Aqsa Mosque director Sheikh Omar al-Kiswani was struck in the leg by a rubber bullet, the witness said.

The violence broke out as Israel stepped up restrictions on Palestinian movement in the West Bank and East Jerusalem amid its ongoing offensive against the Gaza Strip, in which at least 264 Palestinians – mostly civilians – have been killed.

Israeli army has tightened in the West Bank amid growing tension over an ongoing Israeli offensive in the Gaza Strip, which has been under air and naval attacks for the last 12 days.

Israeli forces tightened security measures at checkpoints linking between the West Bank and East Jerusalem ahead of the Friday weekly prayers, eyewitnesses said.

Israeli authorities have banned male worshippers under 50 and women under 40 from crossing into East Jerusalem for prayers at Al-Aqsa Mosque.

For the last two weeks, Israeli authorities restricted access of Palestinians from the West Bank into East Jerusalem for the weekly Friday prayers.

The restrictions come as Israeli forces continued their ground assault on the Gaza Strip following eleven days of air and naval bombardment.

Israel's ongoing air, naval and ground attacks on the blockaded Gaza Strip have deprived hundreds of thousands of Palestinians of water.

He said that Israeli planes had attacked a water tanker in the southern Rafah city, killing its driver.

"The attack has left all municipal workers in panic," Abu Radwan said, going on to say that many workers refuse to leave their workplaces in concern for their safety.

"As a result, vast swathes of areas in Rafah are deprived of water for the past eight days," he said.

The International Committee of the Red Cross (ICRC) has earlier warned that hundreds of thousands of Palestinians live without water in the Gaza Strip.

ICRC head in Gaza Jacques de Maio said that the ongoing Israeli attacks have destroyed water and electricity networks in the Gaza Strip.