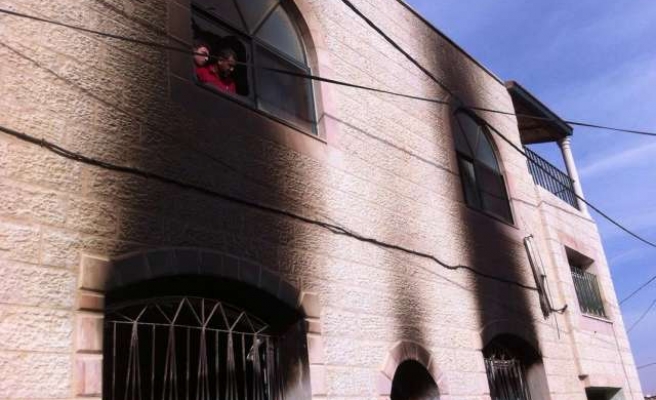 A group of extremist Jewish settlers torched parts of a mosque in the occupied West Bank in the early hours of Wednesday, eyewitnesses have said.

The first floor of the mosque in Ramallah's al-Mogheer village was completely burned and the second floor sustained partial damage from the fire, eyewitnesses told Anadolu Agency.

The settlers have also scrawled "Death to Arabs" and other anti-Arab slogans on the mosque's walls, the witnesses added.

Mayor Faraj Na'asan said there has been repeated vandalism of cars and buildings, and the village's second mosque was partially torched two years ago, blaming Israelis from nearby Jewish settlements.

Israeli ultra-nationalists say such so-called "price tag" attacks are reprisals for Palestinian violence or for any attempt by Israeli governments to curb settlement growth.

The vandalism has at times also targeted Christian sites and Israeli military facilities.

Meanwhile, a Palestinian youth was seriously injured by Israeli gunfire during a raid by Israeli forces in the central West Bank city of Ramallah, eyewitnesses said.

According to the witnesses, an Israeli force stormed Beitunia in the early hours of the day and searched several homes. During the raid, the Israeli forces detained a youth identified as Samer Awwad and injured another.

The injured man, identified as Ahmed Hassouna, was moved to Ramallah medical complex in a serious condition.

Head of the emergency department in the complex told Anadolu Agency that Hassouna sustained gunshot wounds in the thighs and pelvis.

The youth had undergone an urgent surgery and is currently hospitalized at an intensive care unit, he added.

In a statement, the Israeli army said that among the detainees were three local Hamas members and a member of the Islamic Jihad movement.

The remaining three were detained for throwing stones at Israeli troops, the release added.

Tension has run high in East Jerusalem since late last month, when Israeli authorities temporarily closed the Al-Aqsa Mosque complex after an extremist Jewish rabbi was injured in a drive-by shooting in West Jerusalem.

Groups of Jewish settlers, too, have recently forced their way into the religious site, triggering clashes between Muslim worshippers and Israeli forces.

At least two Israelis – one police officer and one settler – were killed and others injured over the past week in attacks by Palestinians.