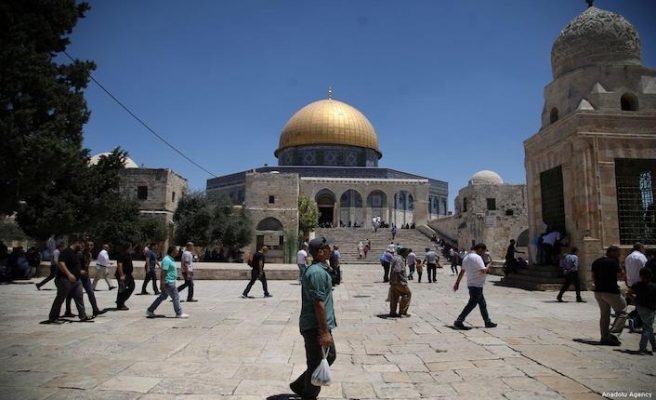 Scores of Jewish settlers early Wednesday vandalized a dozen private vehicles in the Palestinian village of Karyout in the Israeli-occupied West Bank, according to a local official.

“Settlers stormed the village, located south of Nablus, and slashed the tires of several cars parked in the area before painting racist slogans on them,” Ghassan Daghlas, a Palestinian official in charge of settlement affairs, told Anadolu Agency.

Jewish settlers, he added, had recently stepped up their attacks on Palestinian villages, since the region’s farmers are currently busy harvesting their olive crops.

Olive production -- from an estimated 27 million olive trees -- represents a primary source of income for over 100,000 Palestinian families in the West Bank.

According to Palestinian figures, more than 650,000 Israeli settlers now live on 196 Jewish-only settlements (built with the Israeli government’s approval) across the West Bank, in addition to more than 200 settler “outposts” (built without its approval).

In a related development, the Israeli army rounded up 24 Palestinians in overnight raids carried out across the occupied territory, a Palestinian NGO said Wednesday.

“Fourteen Palestinians were detained after Israeli forces raided their homes in the northern West Bank city of Tulkarm,” the Palestinian Prisoner's Society said in a statement.

Another six Palestinians were detained in the West Bank cities of Nablus, Qalqilia and Jericho, the NGO added, along with four others in Hebron (Al-Khalil) and East Jerusalem.

The Israeli army frequently carries out sweeping arrest campaigns in the occupied West Bank and East Jerusalem, which ostensibly target Palestinians "wanted" by the Israeli authorities.

According to Palestinian figures, roughly 6,400 Palestinians are currently languishing in Israeli prisons, including scores of women and hundreds of minors.