The graffiti written on an outside wall of the Dormition Abbey included phrases such as 'kill the pagans' and 'death to the Christian unbelievers, enemies of Israel' 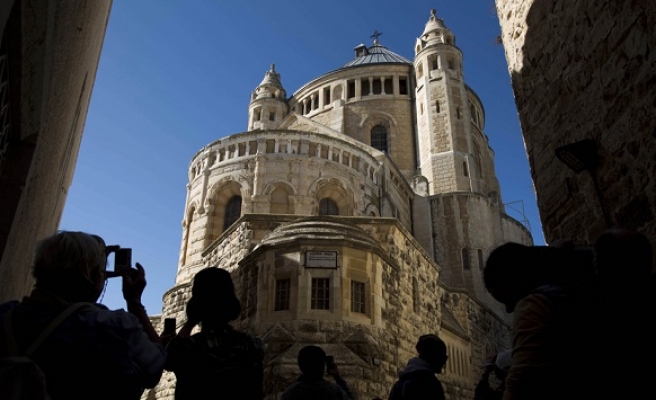 A Jewish 16-year-old has been arrested for anti-Christian graffiti sprayed on a wall of a Jerusalem abbey built where tradition says the mother of Jesus died, police said Wednesday.

The graffiti, discovered Sunday, was written in Hebrew on an outside wall of the Dormition Abbey and included phrases such as "kill the pagans" and "death to the Christian unbelievers, enemies of Israel".

The incident was similar to previous acts blamed on Jewish extremists.

The suspect was to appear in court on Wednesday, a day after being arrested, police said.

The Benedictine abbey is located on Mount Zion across from east Jerusalem's Old City and next to the site where Christians believe Jesus's Last Supper occurred.

It has been previously hit by arson and vandalism.

Vatican efforts to negotiate greater rights at the neighbouring Upper Room, where the Last Supper is believed to have occurred, have sparked opposition from nationalist and Orthodox Jews, who revere part of the building as the tomb of King David.

Pope Francis celebrated a mass at the Upper Room during a visit in 2014.

Jewish extremists have targeted Palestinians, Christians and even Israeli military property in "price-tag" attacks -- a term that indicates there is a price to be paid for moves against Jewish settlers.