Hamas will not cease resisting Israel until all its demands are met, the group's overall leader Khaled Meshaal said, adding the latest Gaza conflict was only "a milestone to reaching our objective". 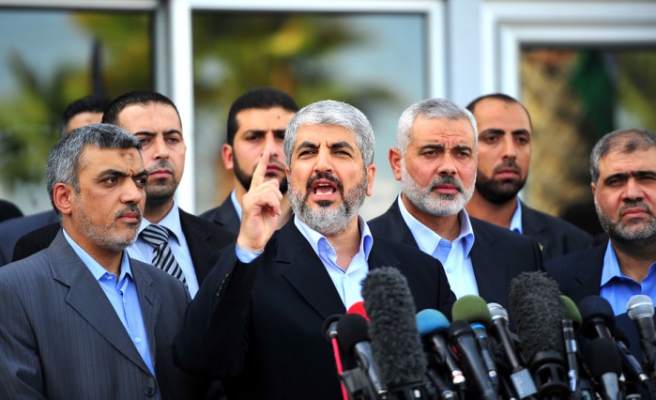 Deif had been the target of an Israeli airstrike on a house in northwestern Gaza City's Sheikh Radwan neighborhood earlier this month. Deif's wife and daughter, however, were both killed in the Israeli attack.

Speaking to a press conference in Doha, Meshaal said that the Israeli blockade of the Gaza Strip has "practically ended" following the "failure" of the recent Israeli war on the enclave.

"The blockade on Gaza must be lifted so that it [Gaza] would not remain explosive at the face of Israel," he added.

"You cannot contain the resistance, because the resistance is in our thoughts and in our souls ... our resistance will continue until all our demands are met and we are getting closer to victory and al-Quds (Jerusalem)," he said.

"This is not the end. This is just a milestone to reaching our objective. We know that Israel is strong and is aided by the international community. We will not restrict our dreams or make compromises to our demands," Meshaal said.

"Our enemy only comes under pressure when they are under fire," he said. "As our rockets hit them, they were forced to hold talks with us."

The Rafah crossing represents Gaza's only gateway to the outside world. All other points into or out of the coastal enclave remain tightly sealed by Israel.

Egyptian authorities have tightened control over the border with Gaza since the army's ouster of elected President Mohamed Morsi last year.

Meshaal said that the Palestinian resistance groups had managed to achieve some of their demands in the indirect, Egyptian-brokered talks with Israel, noting that they would not give up the demand of being allowed to establish a seaport and airport in the enclave.

"The resistance's arms is the guarantee for the realization of the remaining Palestinian demands," he added.

Meshaal also paid tribute to Turkish President Recep Tayyip Erdogan who "found the time to follow up the situation in Gaza while contesting the [presidential] elections in his country."

He also thanked the leaders of Tunisia, Sudan, Malaysia and Latin America for their support to Gaza during the Israeli offensive.

The Hamas leader delivered a message to Jews, saying that his group "has no problems with the Jewish people, but has a problem with the Israeli occupation and settlement building [on Palestinian land]."

An Egypt-brokered cease-fire went into effect on Tuesday, ending 51 days of relentless Israeli attacks on the Gaza Strip in which 2,145 Palestinians were killed and over 11,000 injured – the vast majority of them civilians.

Over the course of the offensive, which was initially launched with the stated aim of ending rocket fire from Gaza, at least 69 Israelis – 64 soldiers and five civilians – were killed, according to Israeli figures.

The Gaza Strip – home to 1.8 million Palestinians – has reeled under a crippling Israeli blockade since 2007, which has all but destroyed the local economy and played havoc with inhabitants' livelihoods.