Muslims across world held mass rallies for al-Quds occupied by Israel for decades in the last Friday prayers of Ramadan. 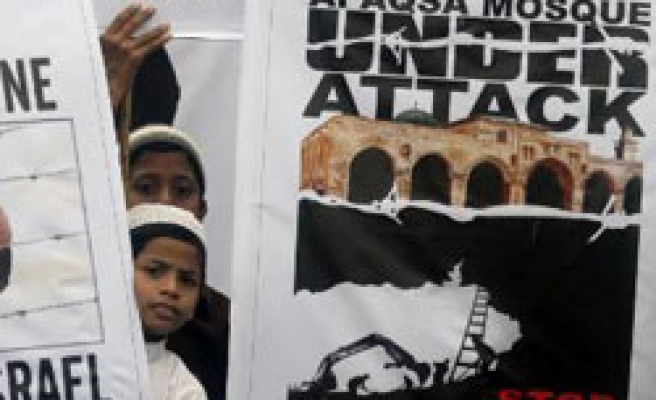 Muslims across world, including Turkey held mass rallies for al-Quds occupied by Israel for decades in the last Friday prayers of Ramadan.

Tens of thousands of Muslims poured into the heavily guarded Al-Aqsa mosque compound in Jerusalem for the last Friday prayers of Ramadan as Palestinians protested over newly relaunched peace talks.

Some 2,000 Israeli Border Police troops and volunteers deployed in Jerusalem Friday morning, surrounding the Al-Aqsa Mosque and the Old City.

Restrictions were tighter then usual as Israeli forces around the city prohibited men under 50 and women under 40 from entering the Haram Ash-Sharif, or Noble Sanctuary where the Al-Aqsa Mosque and Dome of the Rock sit in a large plaza. Those under the age limit with special permits were also permitted in.

Thousands were turned away, and are expected to perform their prayers under heavy guard in the streets surrounding the Old City.

Checkpoints around the West Bank were again overwhelmed, with tens of thousands of men and women lining up from the early hours of the morning, waiting to access Jerusalem.

The sprawling mosque compound is the third holiest site in Islam after Mecca and Medina.

The compound is inside the famed Old City in Arab east Jerusalem, which Israel occupied in the 1967 Six-Day War and annexed in a move condemned by the international community.

The fate of Jerusalem is one of the thorniest issues in the Middle East peace process, with the Palestinians demanding east Jerusalem as the capital of their promised state and Israel claiming the entire city as its capital.

The Al-Quds day was launched by Iran's 1979 Islamic revolution founder Ayatollah Ruhollah Khomeini. It is held on the last Friday of the Muslim holy fasting month of Ramadan.

State television said millions marched in a nationwide rally to mark the day.

Women with small children clutching balloons emblazoned "Death to Israel" were among those flocking the streets of central Tehran.

Ahmadinejad said that the talks would once again fail. He criticised some Muslim leaders for not providing all-out support to the Palestinians in their revolt against Israel.

"The Palestine's issue cannot be resolved through talks with the enemies of the Palestinian nation. Resisting is the only way to rescue the Palestinians," Ahmadinejad told worshippers at Tehran University in a live broadcast to mark the annual Al-Quds (Jerusalem) Day in the Islamic Republic.

"How can these talks succeed when the mediators are those who created this conflict," he added.

"Jerusalem cannot be liberated through negotiations or dialogue ... resistance and Jihad is the only way to liberate Jerusalem from the dirt of the Zionist occupation," said senior Hamas figure Ismail Al-Ashqar.

Call for the observance of the Day had been given by the All Parties Hurriyet Conference Chairman, Mirwaiz Umar Farooq and veteran Kashmiri Hurriyet leader, Syed Ali Gilani.

Indonesian Muslims waved Palestinian flags during the protest outside the U.S. Embassy in Jakarta to support to the Palestinians and emphasizing the importance of Al-Quds.