﻿The death toll of the Israeli onslaught on Gaza has risen to 191 while nearly 1400 Palestinians have also been injured, many seriously. 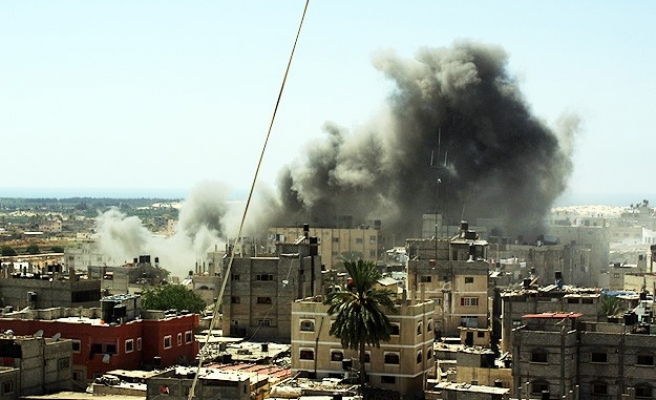 Palestinian Foreign Minister Riad al-Malki called late on Monday for supporting his country's request for the United Nations to put it under international protection.

"The Israeli government is committing genocide against our people," Malki said during an emergency meeting of Arab foreign ministers at the Arab League headquarters in the Egyptian capital Cairo.

He called for creating a new fund for the reconstruction of the Gaza Strip, underlining the importance of contacting influential governments with the aim of throwing light on what he called the "racist" nature of the Israeli occupation of Palestinian territories.

Arab League Secretary-General Nabil al-Arabi said late on Monday that Arab foreign ministers back a decision by Palestinian Authority President Mahmoud Abbas to ask the United Nations to put the state of Palestine under international protection.

"The organization will continue to coordinate and cooperate with the state of Palestine so that it can use all legal channels to bring Israeli officials to account on the crimes they committed against the Palestinian people," he added at an emergency meeting of Arab foreign ministers at the Arab League headquarters in the Egyptian capital Cairo.

The United Arab Emirates late on Monday called for the formation of a fact-finding commission to investigate what it called Israeli "crimes" against civilians in the Gaza Strip.

"The people who commit these military crimes must be brought to international justice," he added at an emergency meeting of Arab foreign ministers in the Egyptian capital Cairo.

He called on Israel to "immediately" suspend the targeting of civilians and collectively punishing the Palestinian people.

Tension has been running high in the Palestinian territories since Israel launched a deadly offensive on Gaza last Monday with the stated aim of halting rocket fire from the Palestinian enclave.

At least 191 Palestinians have been killed and more than 1400 others injured in unrelenting Israeli airstrikes in the Gaza Strip since the operation began last Monday.

Gaza-based resistance factions, for their part, have continued to fire rockets at Israeli cities in response to the ongoing Israeli attacks.

Earlier in the day on Monday, Egypt proposed an initiative for imposing a ceasefire between Gaza-based resistance factions, on one hand, and Israel, on the other.

The initiative calls on Israel to cease all hostilities in the Gaza Strip, halt any ground operations, and stop targeting civilians, according to a statement by the Egyptian Foreign Ministry.

It also calls on Gaza-based Palestinian factions to cease all hostilities against Israel, halt rocket fire and cross-border attacks and stop targeting civilians.

The Egyptian initiative also calls for reopening Gaza crossings and facilitating the movement of persons and goods through borders.