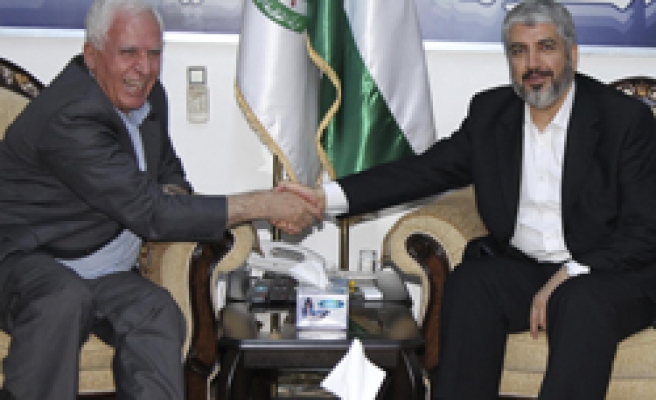 Senior ofiicials from Palestinian main factions Hamas and Fatah met on Friday in Damascus and reached some agreements on several issues, showing a signal through reconciliation talks.

"An agreement was reached for a course and steps to be taken toward reconciliation," said a joint declaration issued after a late night meeting between Hamas leader Khaled Meshaal and Fatah official Azzam al-Ahmed in the Syrian capital.

"There will be another meeting soon to discuss and agree on the rest of disputed items in order to reach a final draft to be approved by all Palestinian factions,” Abu Marzouq also added.

Principal among the remaining disputes between the factions has been the issue of security forces; who would control forces where and mechanisms by which they would be unified in the event of reconciliation Maan news agency said.

The issue of a unity government and timeline for elections has also been a sticking point, with time under the new government to build trust and rehabilitate Gaza primary concerns.

Hamas politburo member Izzat al-Rishq, said the two sides will meet again in Damascus next month to try to solve differences over an Egyptian "reconciliation paper".

"This was a positive meeting," Rishq told reporters.

Hamas had previously rejected the document and refused to go sign it in Cairo because the group considered it biased toward Fatah and could result in Fatah maintaining control over the official Palestinian security apparatus.

Rishq lives in exile in Syria, along with Meshaal and other high-level members of Hamas.

The issue of Israeli settlements in the occupied West Bank and East Jerusalem is already threatening to derail the U.S. supervised talks, which are aimed at reaching a peace agreement within a year.

Two years of Egyptian mediation to try to heal the rift between Hamas and the more secular Fatah have failed.

But Egyptian intelligence chief Omar Suleiman met Meshaal in Saudi Arabia this month and pushed for renewed meetings between the two groups.

Hamas has kept a line with Egypt, although Egypt is helping a much-criticised Israeli blockade on the Gaza Strip.

Hamas won a parliamentary election in January 2006, ending a near-monopoly on power by the Palestine Liberation Organisation (PLO) and its dominant faction, Fatah. The government Hamas formed was subject to a crippling boycott by Western aid donors, leading to a unity government between Hamas and Fatah in 2007.