Jihad Dodwen, 13, was killed during clashes between Israeli forces and Palestinians in Hanina neighborhood on the southern West Bank village of Dura. 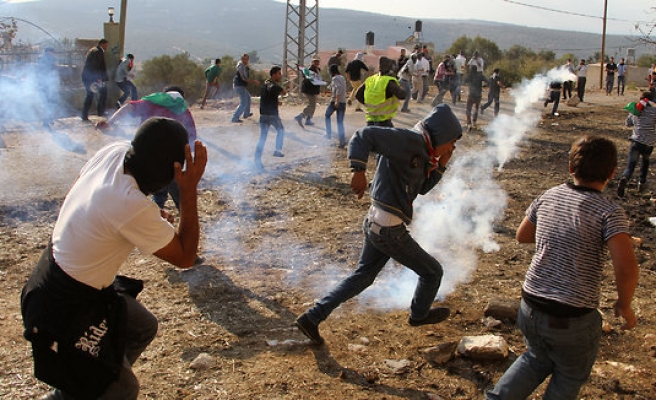 A Palestinian child was killed and two people were injured by Israeli gunfire in the West Bank early Friday.

Jihad Dodwen, 13, was killed during clashes between Israeli forces and Palestinians in Hanina neighborhood on the southern West Bank village of Dura.

"The Israeli army shot directly at my little boy in order to kill him," Jihad's father Mohammad told Anadolu Agency.

"They killed him in cold blood," the grieving father said. "They [Israelis] are punishing the Palestinians by killing their loved ones as they killed my beloved Jihad."

The clashes erupted when an Israeli force stormed the village as part of searches for three settlers, who went missing in the West Bank last week.

An army spokesperson said that Israeli forces fired against Palestinian demonstrators after they hurled rocks and Molotov cocktails.

"There are reports that a Palestinian was injured or killed, which are being reviewed," the spokesperson said.

Meanwhile, two Palestinians were injured in clashes with Israeli forces in the Qalandia refugee camp, south of Ramallah, and al-Dehisha camp near Bethlehem.

Israeli forces have launched a massive detention campaign in the West Bank as part of searches for the three missing settlers, whom the Israeli government accuses Palestinian group Hamas of abducting them.

Since then, Israeli forces have detained around 332 of Palestinians in the West Bank, including several Hamas lawmakers and former ministers In the midst of the largest military operation since 2005.