The youngest Palestinian child prisoner held by Israel, Malek al-Khatib was freed after she was sentenced to jail for 2 months for throwing stones. 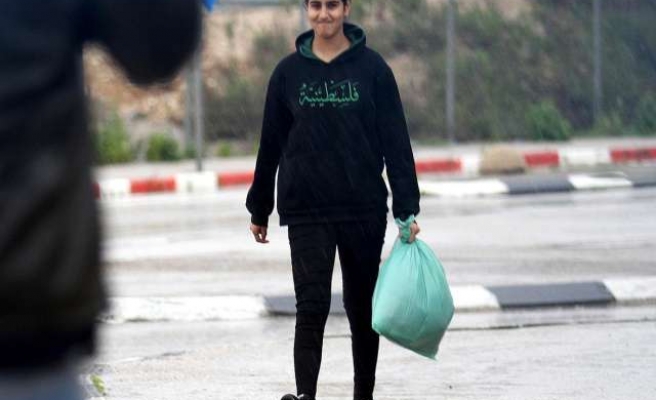 Al-Khatib, 14, was delivered to her parents at an Israeli military checkpoint near the West Bank city of Tulkarm after she had completed a 2-month jail sentence on charges of "throwing stones" at Israeli troops and "possessing a knife."

Upon her emotional reunion with her parents at the checkpoint, al-Khatib told reporters that she had spent a "difficult" time in jail and that she underwent prolonged investigations during her imprisonment.

"It was an indescribably difficult phase," al-Khatib's father told The Anadolu Agency.

Friday was the final day of a two-month jail term handed down against al-Khatib, the Ramallah-based Palestinian Prisoners' Society said a day earlier.

On Jan. 21, al-Khatib became the youngest of 280 children currently being held in Israeli jails after an Israeli court sentenced her to two months behind bars and fined her 6,000 Israeli shekels (roughly $1,500), according to the Ahrar Center for Prisoners' Studies and Human Rights, another Ramallah-based NGO.

The 14-year-old was detained by Israeli forces on Dec. 31 while on her way back home from school in Ramallah.

She was later charged with throwing stones at Israeli police and possessing a knife.

Israeli forces routinely arrest Palestinians in the occupied West Bank on the pretext that they are "wanted" by the authorities.