Palestinian child stomped on, left to bleed to death

A seriously wounded Palestinian child was stomped on with Israeli men saying “Die, you son of a whore!! Die!!” while the child was left to bleed to death. 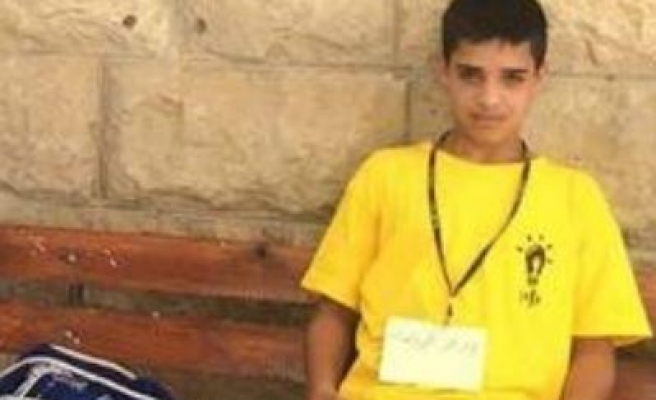 Israeli police spokesperson Micky Rosenfeld said that a Palestinian young man was shot dead after allegedly attacking and injuring an Israeli soldier inside a bus.

According to Israeli police, the attack occurred after a Palestinian attempted to steal the weapon of an Israeli soldier inside a bus at Jaffa Street area located in Western Jerusalem.

The Palestinian was shot dead and the Israeli soldier was slightly injured, Israeli police said.

Earlier on Monday, Mustafa Adel al-Khatib, a 17-year-old Palestinian, was shot dead under the pretext of stabbing an Israeli police officer at the Old City of Jerusalem’s Lion's Gate, the site of several previous knife attacks.

One of the two children, 12-year-old Ahmad Manasra died, while 14-year-old Hasan Manasara was left to bleed in the street; according to medics, Manasara's condition remains “very serious”.

Israeli police also shot and injured Farahi Bajri, a 17-year-old Palestinian girl, after she allegedly tried to stab an officer near their headquarters in East Jerusalem.

According to Palestinian Health Ministry figures, Israeli security forces have killed 27 Palestinians this month alone amid the ongoing violence in occupied West Bank and East Jerusalem

A total of 15 Palestinians were killed in the West Bank and 11 in the Gaza strip, in addition to 1,300 Palestinians who were shot and hurt by Israeli gunfire, the ministry said.

A recent wave of Palestinian knife attacks in Jerusalem and Israel has prompted Israeli authorities to step up security, with Israeli Prime Minister Benjamin Netanyahu ordering the deployment 16 battalions of the paramilitary Border Police.

Jerusalem's teeming Old City, in particular, has seen a significant increase in the presence of security forces, with troops stationed on rooftops and at numerous checkpoints throughout the city, especially near the homes of Israeli settlers.

Human Rights Watch (HRW) on Sunday released a statement saying that the use of live ammunition against protesters, unless in self-defense, was unlawful.

The group made the assertion after one of its researchers was struck by a rubber bullet during a protest in the West Bank.

“Indiscriminate or deliberate firing on observers and demonstrators who pose no imminent threat violates the international standards to which the Israeli security forces are bound,” the watchdog’s Executive Director Kenneth Roth said.

“Israel is provoking violence in Jerusalem and creating a situation of instability as cover to exercise control over the Al-Aqsa Mosque [Islam's third holiest site], transform the character of Jerusalem, annex more Palestinian land and step up its illegal settlement-building activities,” Ashrawi said.

After a Sunday cabinet meeting, Netanyahu said that the Al-Aqsa Mosque was at the center of the violence, going on to assert that recent Palestinian knife attacks were a result of “incitement” by Palestinian groups.

Netanyahu also called for an investigation of Hanin Zoabi, a Palestinian lawmaker in Israel’s parliament, who reportedly called for a popular Palestinian uprising in a recent interview with a Hamas-linked publication.