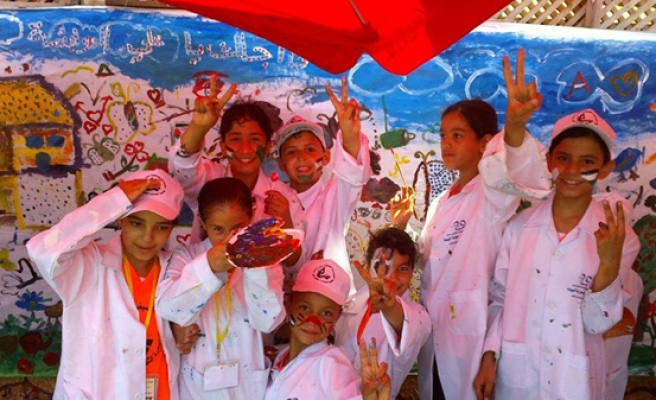 According to al-Gamal, the “international language” of painting represents an effective means of portraying the violence suffered by many Palestinians at the hands of Israeli troops.

Since Oct. 1, more than 70 Palestinians -- including a number of women and children -- have been killed at the hands of Israeli troops in the Israeli-occupied West Bank and the blockaded Gaza Strip.

Al-Gamal, 20, who lives in the city of Rafah in the southern Gaza Strip, says she started painting because she wanted to be part of the Palestinian struggle against ongoing Israeli violations and abuses.

“I thought about how I could contribute to the struggle and realized that painting scenes of the intifada -- and showing the steadfastness of the Palestinian people -- was the most effective way,” she told Anadolu Agency.

“After all, art is an international medium; it’s understood all over the world,” she said.

Al-Gamal began finger-painting four months ago. Since then, two of her paintings have been exhibited at a local university, where they have won the praise of teachers and students alike.

“I start by drawing photos [of the intifada] that I find online, using charcoal pencil,” she explained.

“Then, I color them in with my fingers,” she added. “My fingers are always stained with color now, but I don’t mind -- in fact, I like it.”

Pointing to one of several paintings hung up in her room, she said: “In this one, a girl holds a door key in her hand, symbolizing Palestinians’ dream of one day returning to their ancestral homes.”

“Here I express the idea that we will never abandon our homeland; that -- someday -- we will go back,” she added.

Drawing attention to another painting -- which depicts a knife in the shape of a map of Palestine, under which is written “The Intifada of Knives” -- the young painter said: “Here I wanted to reflect Israel’s fear, the result of nothing more than a knife.”