Al-Qeeq pushed close to death by hunger strike he started on Nov. 25 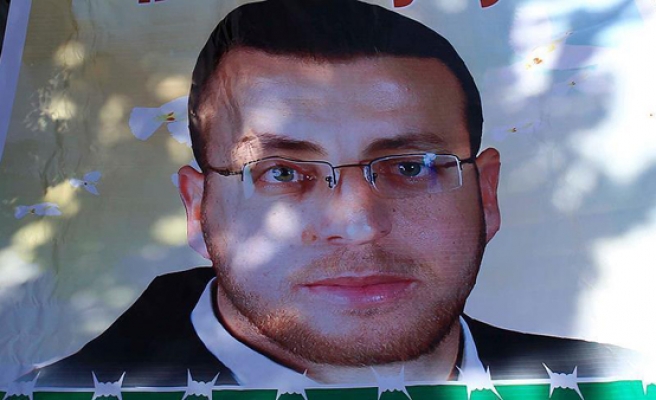 Prayer beads patterned in the colors of the Palestinian flag rest in the fragile hands of hunger-striking Palestinian journalist Mohammed al-Qeeq, who lies in his hospital bed staring at the wall.

By his side, on the 85th day of his protest against his administrative detention, is a copy of the Quran and a group of close friends and supporters. Outside, Israeli guards stand at the entrances to his room and the whole ward.

Al-Qeeq has been pushed close to death by the hunger strike he started on Nov. 25, but has refused to end it even after his administrative detention was suspended, but not canceled, by Israel’s supreme court because it ordered he be treated at an Israeli hospital in the city of Afula.

Another offer this week for him to be treated at the Palestinian Makassed Hospital in East Jerusalem was no better, because Israeli forces regularly enter the hospital to arrest patients.

“Two days ago, he had signs of a heart attack and he always has pain in his chest. He is determined to go to the hospital in Ramallah. He says I’m a journalist and even the Israeli court said I’m not a prisoner, so it is my right to be treated in Ramallah Hospital, not Afula,” al-Qeeq’s friend Mohammed Liwesi told Anadolu Agency on Wednesday.

Al-Qeeq himself is too weak to speak and visitors are given only a minute to see him. A video shared online earlier this week showed the journalist, whose gaunt and now fully-bearded face displays the impact of his hunger strike, writhing in pain.

Liwesi said al-Qeeq’s doctor believes his case is unusual in that, unlike other high-profile Palestinian hunger strikers, he has refused to take a saline drink, instead only drinking plain water. He has also refused medical examinations, preventing the doctors from being able to fully evaluate his condition.

Liwesi said that with al-Qeeq determined to stand by his condition to be treated in Ramallah, despite his constant pain, they are hoping that a solution can come from ongoing talks between Palestinian and Israeli authorities.

“The Israeli government has been thinking that this is a war between the government and al-Qeeq, but it’s not exactly like that. He’s just a journalist,” said Liwesi.

Waiting in the hospital hallways outside al-Qeeq’s room are a handful of supporters on their second day of a hunger strike called in solidarity with al-Qeeq and led by Shiekh Raed Salah, a high-profile leader of the Israel-based Islamic Movement.

Salah, whose group commands strong support among parts of the Arab-Israeli community but was outlawed by Israel late last year, told Anadolu Agency the court decision was “unjust and racist.”

“We are in an open-ended strike, there is no specific number of days, our strike is linked with the developments, meaning that if Mohammed al-Qeeq remains on his hunger strike for days or weeks, [then] we will continue the same hunger strike and will not stop,” Salah told Anadolu Agency.

“[If he dies], it is very clear in my opinion that this will not pass quickly and easily in the Palestinian street. The Palestinian street is now nervous and follows moment-by-moment the developments of the prisoner Mohammed al-Qeeq,” said Salah, warning that there would be a strong “backlash” if al-Qeeq died.

London-based human rights watchdog Amnesty International on Wednesday called for Israel to grant al-Qeeq’s request to be treated at a hospital of his choice.

"As an unconvicted detainee, al-Qiq has the right to treatment by doctors of his choice. Given his critical health situation, the Israeli authorities must respect his wishes and transfer him to the hospital that he has chosen without delay,” Amnesty said in a statement.

“The Israeli authorities should cancel the detention order against him and release him, unless he is charged with an internationally recognizable criminal offence and tried in accordance with international fair trial standards.”