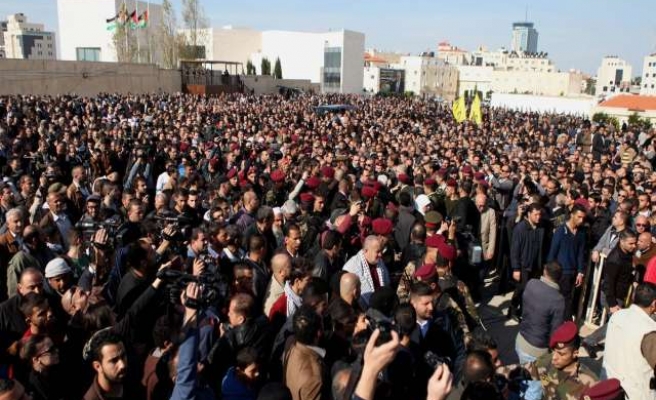 World Bulletin/News Desk
A Palestinian was injured and scores of others suffered temporary asphyxiation due to teargas during Thursday clashes with Israeli army troops in the West Bank.

The clashes broke out following the funeral of a senior Palestinian official who died one day earlier when Israel violently broke up an anti-settlement protest.

One Palestinian was injured by live ammunition and was rushed to the Ramallah medical center for treatment, a Palestinian medic told The Anadolu Agency.

Scores of Palestinians also suffered teargas inhalation in separate clashes with Israeli forces in the West Bank cities of Al-Bireh and Hebron.

Thursday's violence broke out following a funeral held for Ziad Abu Ein, who had been in charge of the Israeli settlements file for the Palestine Liberation Organization (PLO).

Abu Ein died when Israeli forces forcibly dispersed an anti-settlement protest in in the West Bank town of Turmus Ayya.

Palestinian forensics chief Saber al-Aloul attributed Abu Ein's death primarily to internal bleeding of the coronary artery, which, he said, had been a consequence of "severe trauma."

Images from Wednesday's protests showed an Israeli soldier gripping Abu Ein's neck and shoving him. Autopsy results, according to al-Aloul, had revealed bruises on either side of his neck, along with severe facial injuries.

The Israeli army has since pledged to conduct a "review" of the circumstances of Abu Ein's participation in the protest and his subsequent death.