Jordanian and Palestinian doctors said Ziad Abu Ein had died from "being struck, inhaling tear gas and a delay in providing medical attention." But an Israeli medical source familiar with the autopsy results claimed the minister died from a heart attack 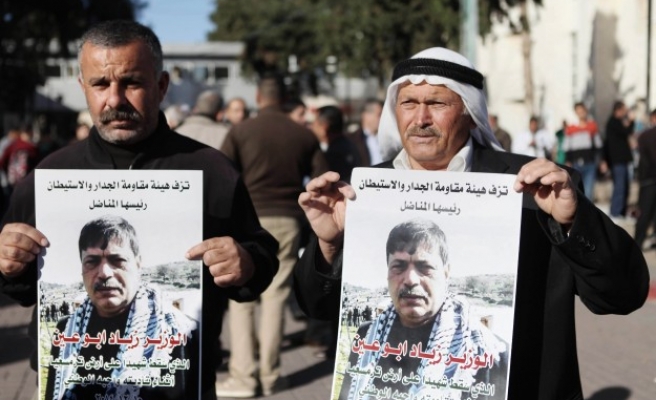 Israeli and Palestinian officials issued conflicting accounts on Thursday over the results of an autopsy on a Palestinian minister who died after being shoved and grabbed by the neck by an Israeli policeman at a West Bank protest on Wednesday.

The incident comes at a time of heightened tension between Israel and the Palestinians, following months of violent unrest in Jerusalem, Tel Aviv and the Israeli-occupied West Bank.

Saber al-Aloul, the head of the Palestinian forensic authority, told reporters in Ramallah that an autopsy had revealed that Abu Ein had sustained a severe face injury in which his front teeth were broken and his tongue badly bruised.

The autopsy had also revealed bruises on Abu Ein's neck, along with signs of teargas inhalation, said al-Aloul, who is currently leading a fact-finding committee tasked with investigating the official's death.

Al-Aloul went on to attribute Abu Ein's death primarily to internal bleeding of the coronary artery, which, he said, had been a consequence of "severe trauma."

Palestinian Civil Affairs Minister Hassan al-Sheikh, citing the findings of a group of Arab doctors, said that Abu Ein had died after being beaten by Israeli troops, exposed to excessive amounts of teargas, and prevented by the Israeli army from reaching a hospital in a timely manner.

He added that the Palestinian authorities had conducted the autopsy in an East Jerusalem university hospital on Wednesday night after having refused to allow an Israeli medical center to perform the procedure.

An Israeli doctor, al-Sheikh noted, had also attended the autopsy and admitted that the process was carried out "professionally."

But an Israeli medical source familiar with the autopsy results told Reuters the minister died from a heart attack and had a pre-existing heart condition.

"His death was caused by a coronary occlusion, brought on by stress. The stress may have been brought on by him being grabbed by the neck," said the source, who spoke on condition of anonymity because he was not authorized to speak to the media.

About 30 Israeli soldiers and border policemen fired tear gas and sound grenades at about 100 people protesting against a Jewish settlement by planting olive trees in the village of Turmusiya north of Ramallah on Wednesday.

A scuffle ensued in which a border policeman pushed Abu Ein and grabbed his neck firmly with one hand. Footage of the incident and pictures taken by Reuters do not show Abu Ein responding with any violence.

Minutes later the minister began to look faint and fell to the ground, clasping his chest. He died on his way to hospital.

Palestinian president Mahmoud Abbas called the incident "barbaric" and said he and other top leaders would consider a response after a funeral for Abu Ein with full military honours at midday on Thursday.

Israel reinforced troops in the West Bank and defence minister Moshe Yaalon issued an apology over the death.