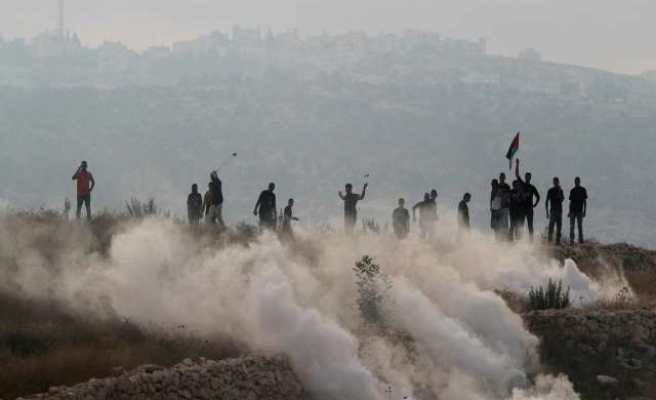 Scores of Palestinians protested and clashed with Israeli police in East Jerusalem on Sunday after hearing that a youth from their neighbourhood had died of wounds from Israeli fire.

Protesters in the neighbourhood of Wadi al-Joz close to the walled Old City threw rocks, petrol bombs and flares at passing cars, and riot officers responded with rubber bullets during an afternoon of clashes that lasted for several hours. There were no reports of serious injury.

Mohamed Abdul-Majid Sinokrot was seriously injured when a rubber bullet struck his head during clashes between Palestinian protesters and Israeli troops that raided the neighborhood.

Sinokrot was first taken to a nearby hospital before being transferred to Israel's Hadassah Ein Karem medical center in West Jerusalem.

Sinokrot's uncle, Mutadi Sinokrot, told Anadolu Agency that the family's lawyer has asked the police and hospital’s administration to release the body for burial.

“We expect to take Mohamed’s body today. The lawyer is inside the hospital to talk with the police and we are waiting outside with his father and other relatives,” he told AA on phone.

Eyewitnesses who saw last week's clashes said that the Israeli troops directly targeted Sinokrot and shot him from a short distance, causing the boy to fall unconscious and bleed.

Street clashes with police in riot gear, military-style raids on homes late at night and stone-throwing at Israeli vehicles have marked the most serious outbreak of violence in Jerusalem since a Palestinian uprising a decade ago.

The protests in the city have been raging almost nightly beyond the spotlight on the Gaza war, leading to a crackdown by Israeli police in which hundreds of Palestinians have been detained.

The protests erupted in July after the murder of a Palestinian teen in a revenge attack by three Jews, who are standing trial.

The seething tensions have underscored deepening divisions in a the Israeli-occupied part of the city.

Israel captured East Jerusalem along with Gaza and the West Bank in the 1967 Six Day War. It annexed the city shortly afterwards and passed a law in 1980 that declared all of Jerusalem its capital, a move not recognised internationally.

Some 40 percent of Jerusalem's 800,000 residents are Palestinians. They have Israeli-issued identity cards that entitle them - as residents of a city that Israel regards as part of the Jewish state - to the same civil rights and state-funded services afforded Israeli citizens.

But many see Israeli settlement construction in annexed areas of Jerusalem and restrictions on access to the al Aqsa mosque in the historic Old City, as attempts to change the nature of the city.

Much of the anti-Israeli violence in recent years in Jerusalem has flared at the sacred compound in Old City where al Aqsa mosque is located.