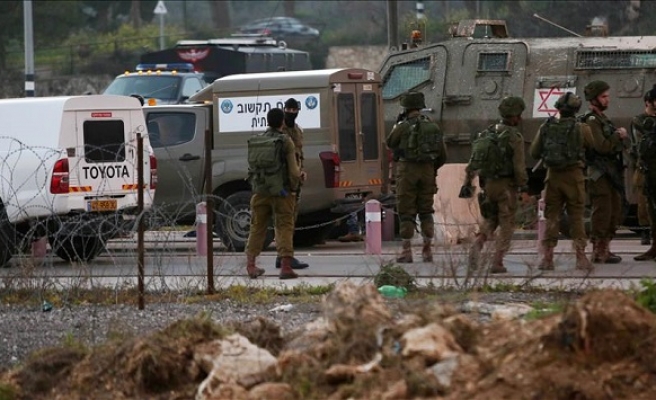 Two-year-old Darwish Darwish parts the curtains of his home to show where the window was smashed during an overnight raid Sunday that culminated with him spending hours outside an Israeli police station, barefoot and in his pajamas.

The Darwish family, who live in East Jerusalem neighborhood Issiwiya, said Tuesday they were left shaken by the experience, adding that soldiers used pepper spray inside their house and also hit several of their family members.

"One of my sons was sleeping, they seized him and started banging his head against the wall for no reason," the child's mother, Tahrir Darwish, recalled.

“I ran to the room to get my two-and-half-year-old child [Darwish] and one of the soldiers followed me, grabbed my child by his foot and threw him to the ground," the mother said, adding that when she returned to the living room holding her youngest son, she found that her husband, another son and daughter were also being beaten.

"One of the soldiers put my baby under my body and stood on me for more than 10 minutes," she said.

The family said they had their hands bound and were kept in the living room until more soldiers arrived and made them walk a kilometer barefoot and blindfolded to a car park used by Israeli soldiers.

"My father arrived two hours after we reached the car park and my toddler ran to him shouting: 'grandfather… grandfather, soldiers beat my mother and sprayed gas in my mouth’," she added.

Her husband Tarek Darwish said the raid began at around 2 a.m. Sunday when he refused to let soldiers in to arrest their son Laith, 17, reportedly for stone-throwing, unless they showed a search warrant.

He said they were eventually taken to a police station in East Jerusalem where the family was held the whole day for interrogations.

"Laith was taken by the Israelis, we asked about him with the Israeli police and army several times but they refuse to tell us where he is," the husband said.

While the Israeli forces eventually released the mother and father and their two sons, including the toddler and their three daughters later on Sunday, Laith continues to be held.

The family said they were left in shock by the raid and two of their daughters have since refused to go to school because of their experience.

Israeli newspaper Haaretz quoted an Israeli police response, claiming Israeli armed forces were attacked by the family during the operation in Issawiya which then "managed to pacify the attackers".