Palestinians call for abolishment of Oslo Accord

1993 agreement left Israel free to pursue its settlement plans while leaving Palestinians worse off than ever, Palestinian experts say 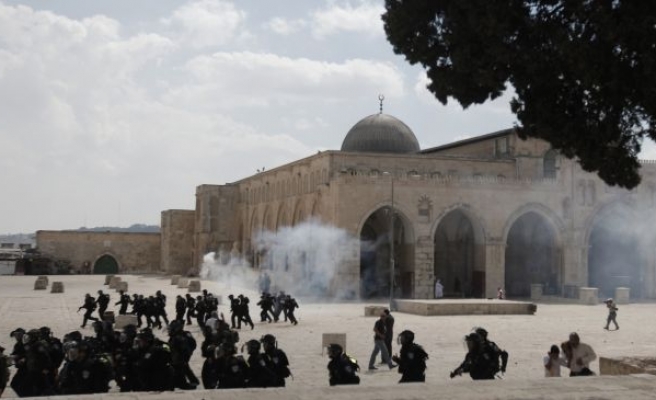 Twenty-three years after the famous handshake between Palestinian leader Yasser Arafat and Israeli premier Yitzhak Rabin, some Palestinians now say that the Oslo Accords – which opened relations between the two sides – was a major mistake.

Signed on Sept. 13, 1993, the Oslo Accords were the first direct agreement between Arafat’s Palestinian Liberation Organization (PLO) and the Israeli government.

With the signing of the accords, the PLO acknowledged the state of Israel on 78 percent of historical Palestine, while Israel recognized the PLO as the “legitimate representative” of the Palestinian people.

Abd al-Sattar Qasm, a political science professor at Al-Najah University, however, believes the accords were a “historical mistake”.

“Through Oslo, the Palestinians recognized Israel, and, in return, Israel acknowledged a Palestinian interim self-governing authority – not a state,” Qasm told Anadolu Agency.

“The accords left us with no sovereignty over our land, borders, water, communications or airspace,” he said. “We remain prisoners living in isolated cantons.”

Under the terms of the Oslo Accords, Qasm noted, key issues – including the status of Jerusalem, refugees, Jewish settlements, security arrangements, borders, international relations, water, communications and airspace – were all put off until future “permanent-status talks”.

According to Qasm, the Oslo Accords have allowed Israel to assert its control over the Palestinian territories without having to bear the cost of an expensive military occupation.

“Israel has succeeded over the last 23 years in controlling the Palestinians via security coordination [with the Palestinian Authority], arrest campaigns, and frequent incursions, all of which are a result of the Oslo Accords,” he said.

“Meanwhile, Israel has failed to abide by its commitments to the Palestinians as laid out in the accords,” Qasm added. “On the contrary, it has continued to build Jewish-only settlements on confiscated Palestinian land.”

He went on to point out that, since the signing of the accords, Israel had invaded the West Bank in 2003 – where it besieged an aging Arafat – and had waged three devastating wars (in 2008, 2012 and 2014) on the blockaded Gaza Strip.

“By signing Oslo, the Palestinian leadership – which thought Israel would give them a state – has brought its people into a long, dark tunnel,” Ahmad Rafiq Awad, a Palestinian expert on Israeli affairs, told Anadolu Agency.

“The only viable solution for the Palestinians now is to abandon the Oslo agreement and choose the option of armed confrontation with Israel,” he said.

Awad went on to assert that certain Palestinian political figures were actually benefiting financially from the Israel’s decades-long occupation and did not want to challenge the status quo.

According to prominent Palestinian MP Mustafa Barghouti, all past agreements signed by the Palestinians with Israel – including the Oslo Accords – “simply enhanced the occupation and helped Israel further control our resources and freedom."

The main failure of Oslo, he told Anadolu Agency, was that it merely served as a “transitional agreement” with no specific objectives, allowing Israel to continue its ongoing settlement plans.

“Oslo was signed without any guarantee to halt Jewish settlement construction in East Jerusalem, the West Bank and the Gaza Strip,” said Barghouhti, who went on to note that – since Oslo was signed – the total number of Jewish settlers living on occupied Palestinian land had risen from 160,000 to 550,000.

Bassam al-Salhi, secretary-general of the Palestinian People’s Party, said the Oslo Accords suffered “structural imbalances”, which, he said, had allowed Israel to evade its commitments to the Palestinians.

“The Palestinians agreed to ‘postpone’ their sovereignty over the land and people to future ‘permanent-status’ negotiations – this was a huge mistake,” he said.

“Instead of Oslo, we need a new national project that unites all Palestinian factions against the occupation,” al-Salhi added.

Palestinian lawmaker Qais Abdul Karim, for his part, said the Palestinian people had paid the price for the “unfair agreement”, which, he asserted, had merely provided cover for Israel’s crimes against Palestinians.

“After 23 years, it’s now clear that the Oslo Accords can’t achieve independence for the Palestinian people,” Abdul Karim, a member of the Democratic Front for the Liberation of Palestine, said.

“The Palestinian leadership must end this agreement and work on establishing a united national project against the Israeli occupation,” he added.

The Palestinian leadership, for its part, is apparently mulling fresh options.

Nabil Shaath, a leading member of Palestinian faction Fatah (the chief component of the Palestinian Authority), told Anadolu Agency that the Palestinian leadership had “made some mistakes” back in 1993 – especially the acceptance of a transitional government with limited powers.

“Israel is selective when it comes to the implementation of the Oslo Accords – it only takes what serves its interests,” said Shaath, a member of Fatah's central committee.

He went on to point out that the Palestinian leadership had not decided to end the agreement, but that it planned to take “important decisions” regarding its relationship with Israel by the end of this month.

According to Shaath, Palestinian Authority President Mahmoud Abbas, at an upcoming session of the UN General Assembly, plans to call for a new peace initiative backed by the UN.