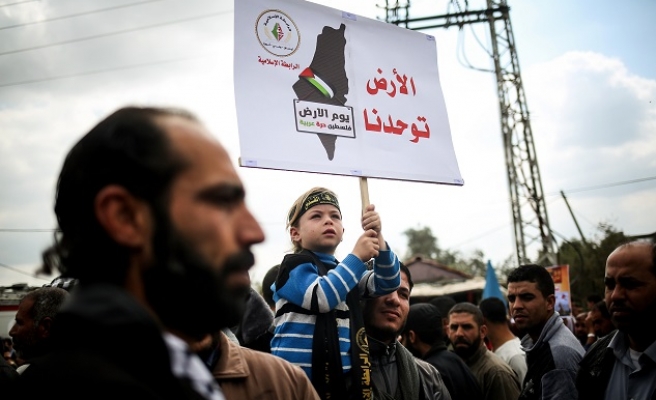 Palestinians on Wednesday geared up to mark "Land Day", which commemorates six Palestinian protesters killed by Israeli troops 40 years ago while demonstrating against the seizure of their land in the northern Galilee region.

On March 30, 1976, thousands of Palestinians demonstrated against the seizure of thousands of square kilometers in the Galilee region of what is now northern Israel, where Palestinians constitute an overwhelming majority.

Galilee residents responded to the land seizure by declaring a general strike, which prompted Israeli troops to enter the region in force and clash with angry Palestinians.

Mohammed Barakeh, chairman of the Supreme Follow-up Committee for Arab Citizens of Israel, said that Land Day demonstrations had been planned in several Arab villages in Israel.

"Palestinians will mark this year’s Land Day with massive demonstrations in Arabeh Village in Galilee and in Um al-Hayran village in southern Israel," Barakeh said.

"After 40 years of the crime against our people in the Galilee, we are still holding marches to deliver the message that we will remain on our land and that we will not leave," he said.

Palestinians in the Israeli-occupied West Bank and the blockaded Gaza Strip will also mark the occasion by holding demonstrations in areas threatened by fresh land confiscations.

"We’re here to stand with our people [who were expelled from their land in] 1948, as we always have," Salah al-Khawaja, coordinator of the Popular Committee against Settlements, said.

"Today we will mark the day when our people stood up to Israel's attempt to steal their land," he said.

"Numerous events and demonstrations will be held in the West Bank and Gaza City to remind Israel that we still stand united against occupation," he added.

According to the Palestinian Central Bureau of Statistics, Israel has seized 85 percent -- some 27,000 square kilometers -- of the land of historical Palestine since the Jewish state was established in 1948.

International law considers the West Bank and East Jerusalem to be "occupied territories" captured by Israel in 1967, deeming all construction of Jewish settlements on the land to be illegal.

Until today, Israel has continued to misappropriate Palestinian land in the West Bank -- on which it has steadily continued to build Jewish-only settlements -- in breach of international law.

The Palestinian Authority, for its part, continues to call for the establishment of an independent Palestinian state in the Gaza Strip and West Bank, with East Jerusalem -- currently occupied by Israel -- as its capital.