Thousands of flag-waving Palestinians rallied Wednesday in towns across the occupied West Bank to show support for their president's bid to win U.N. recognition of a Palestinian state. 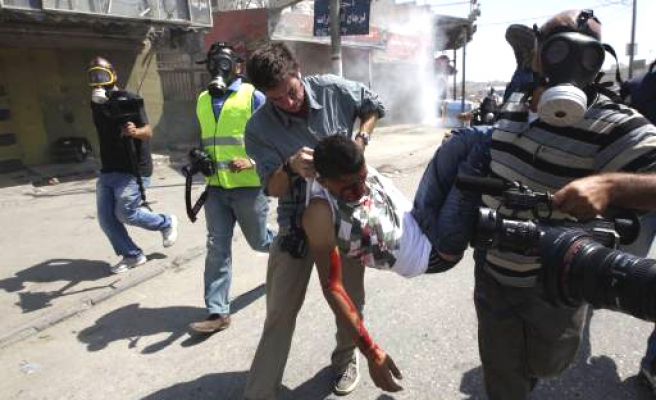 Thousands of flag-waving Palestinians rallied Wednesday in towns across the occupied West Bank to show support for their president's bid to win U.N. recognition of a Palestinian state.

The gatherings were carefully orchestrated, with civil servants and schoolchildren given time off to participate, and the mood seemed largely subdued. Still, a new poll indicated an overwhelming majority of Palestinians support President Mahmoud Abbas' quest for U.N. recognition of a state in the occupied West Bank, besiged Gaza and east Jerusalem.

In the city of Ramallah, the seat of Abbas' government, crowds of youths hoisted Palestinian flags in a downtown square and chanted slogans calling for the establishment of an independent Palestine. Others used the time to mingle and do some window shopping in the newly refurbished town center with tree-lined pedestrian areas.

Tens of thousands of Palestinians turned out in the northern West Bank city of Nablus in support of Abbas. Joined by a small ultra-Orthodox Jewish sect that opposes Israeli state, activists prayed at the nearby Joseph's tomb and raised a Palestinian flag.

"Anger with US veto"

A large mockup of a blue chair, symbolising a seat at the U.N., and giant Palestinian flags hanging from buildings provided a backdrop for the Ramallah rally, where attendence peaked at several thousand.

"We are asking for the most simple of rights, a state like other nations," said Sabrina Hussein, 50, carrying the green, red, black and white Palestinian national flag at a demonstration in Ramallah.

At the Ramallah rally, Amina Abdel Jabbar al-Kiswany, a head teacher, said the U.N. bid was a step on the road to statehood, not a solution to the decades-old Israeli-Palestinian conflict, which direct negotiations have failed to resolve.

"It's a cry of desperation," Kiswany said.

Reflecting anger with U.S. double standard policy, a Palestinian, his face covered by a scarf, climbed the stage scaffolding and set ablaze an American flag. Earlier, some of the demonstrators had tried to stop the flag burning.

"America talks about human rights. They support South Sudan. Why don't they support us?" said Tamer Milham, a 26-year old computer engineer, referring to the new state of South Sudan which was admitted to the United Nations in July.

Later in the day in New York, U.S. President Barack Obama was due to meet Abbas to urge him to drop plans to ask the U.N. Security Council to recognise a Palestinian state.

Abbas has said he will present U.N. Secretary General Ban Ki-moon with a membership application on Friday. The move requires Security Council approval and the United States, one of five veto-wielding permanent members, says it will block it.

The Israeli leader was due to meet Obama, with whom he has had a strained relationship, later in the day on the sidelines of the U.N. General Assembly.

Palestinians hope to establish a state in the West Bank, East Jerusalem and Gaza Strip, territories occupied by Israel since 1967.

The U.S. has said it would veto Abbas' request in the U.N. Security Council, and members of Congress have threatened to cut hundreds of millions of dollars in U.S. aid to the Palestinians.