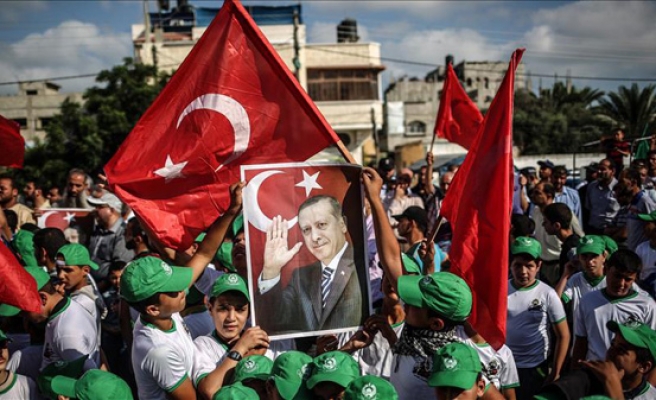 Hundreds of people took to the streets in the Gaza Strip and Lebanon on Saturday to celebrate the failure of a coup attempt by a renegade faction of Turkey’s military.

The father of seven went on to recount how he had surfed through television channels all night to follow the dramatic events in Turkey.

"News of the coup attempt came as a big shock," he said. "But now the shock has turned to joy."

Some carried banners reading, "Gaza won’t forget those who stood by it" -- a reference to the Turkish government’s longstanding support for the people of Gaza, who have suffered under a decade-long embargo imposed by Israel and Egypt.

"This is a message to our brothers in Turkey that the Palestinian people stand by you," Yunus al-Astal, a leading member of Palestinian resistance movement Hamas, which has governed the strip since 2007, said.

In Lebanon, meanwhile, hundreds of people rallied in the southern city of Sidon to celebrate the failure of the coup bid in Turkey.

Waving Turkish flags, demonstrators gathered outside the city’s Turkish hospital amid chants in support of Turkish President Recep Tayyip Erdogan and his government.

Dozens of Lebanese also staged a sit-in in the northern city of Tripoli in a show of support for Turkey’s elected government.

Some demonstrators performed dawn prayers in Tripoli’s Nour Square in what they described as an "expression of gratitude to God" for the failure of the coup bid in Turkey.

On Friday night, renegade elements within Turkey’s military attempted to stage a coup against the government.

Although the coup was soon put down by the country’s legitimate authorities and security apparatus, roughly 160 people were martyred in the violence, according to Prime Minister Binali Yildirim.