Palestinians to raise flag at UN for first time 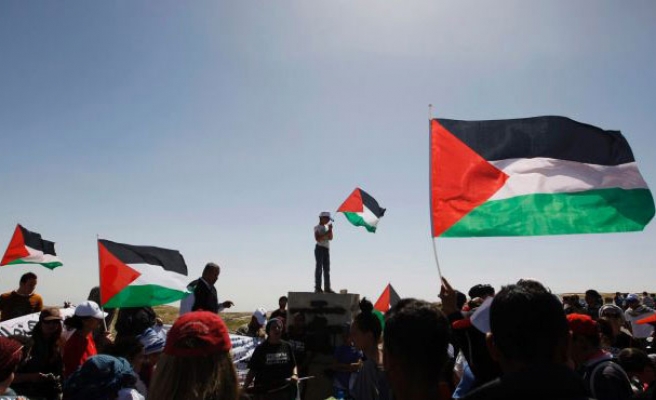 The Palestinians will raise their flag at the United Nations on Wednesday in what president Mahmud Abbas calls a beacon of hope at a time of growing despair of achieving an independent state.

UN Secretary-General Ban Ki-moon and Abbas will preside over the 15-minute ceremony in the rose garden, to begin at 1:00pm (1700 GMT) shortly after the Palestinian leader addresses the General Assembly.

Abbas, 80, called it "our moment of hope," in an op-ed published by The Huffington Post on the eve of the ceremony.

Rain is forecast for much of the day, which could put a damper on an occasion condemned by Israel and the United States as a symbolic gesture that would not serve the cause of peace.

Hundreds of world leaders are invited, but an official at the Palestinian mission to the UN could say only that "a large" number would attend.

The General Assembly voted September 10 to allow the flags of Palestine and the Vatican -- both have observer status -- to be raised at the world body alongside those of member states.

The resolution was backed by 119 countries, with 45 abstentions and eight votes against, including Australia, Israel and the United States.

In The Huffington Post, Abbas urged the international community to urgently "seize the momentum" from the flag-raising and provide a clear plan to end Israeli occupation, uphold human rights and achieve justice.

"It is time to finally achieve the independence of the State of Palestine, peacefully resolving the Palestinian-Israeli conflict," he wrote.

Abbas called for a multilateral peace process as in the Balkans, saying that Palestinians cannot negotiate directly with Israel, which "exhibits such contempt for the rights and existence of our people."

His address to the General Assembly, expected at 12:00 pm (1600 GMT), will be closely watched for clues about his intentions at a time of growing volatility.