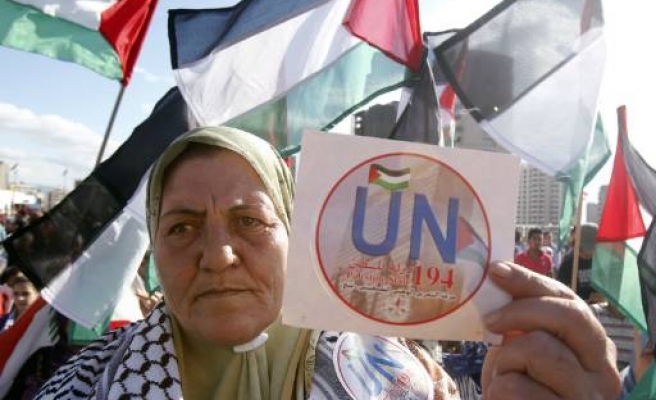 The Palestinians want the United Nations Security Council to decide on their bid for full membership of the world body within a fortnight, a leading official in the Fatah movement of President Mahmoud Abbas said on Saturday.

Lebanon's U.N. ambassador said the Security Council would convene on Monday to discuss the application after Abbas presented it to U.N. Secretary-General Ban Ki-moon on Friday.

"I circulated the letter (Palestinian application) to all members of the Security Council and I called for consultations in light of this letter on Monday at three in the afternoon (1900 GMT)," Ambassador Nawaf Salam told reporters.

Abbas's statehood bid reflects his loss of faith after 20 years of failed peace talks sponsored by the United States, and alarm at Israeli settlement expansion in occupied land that Palestinians want for a state.

Apart from the U.S. veto threat, it was also unclear if the required nine of the body's 15 members would support the bid.

"Consultations continue, especially with Gabon, Nigeria and Bosnia-Herzegovina, which have yet to define their position," Maliki was quoted as saying.

Alternate to the Security Council, the Palestinians, who currently have observer status at the U.N., could ask for the General Assembly to vote to upgrade them to a non-member state which would allow them membership of a number of U.N. agencies.

The General Assembly vote requires only a simple majority of the current 193 member nations, seemingly an easy proposition for the Palestinians.

In his speech to the General Assembly on Friday after presenting the request, Abbas said: "I do not believe that anyone with a shred of conscience can reject our application ... and our admission as an independent state."

But Israeli Prime Minister Benjamin Netanyahu, who spoke shortly after Abbas, said peace could be achieved only through negotiations and dismissed the world body as a "theatre of the absurd."

Shortly after the two men ended their speeches, the quartet of Middle East peace negotiators -- the United States, Russia, the European Union and the U.N. -- issued a call for a return to direct peace talks which U.S. Secretary of State Hillary Clinton said was a "concrete proposal".

"The United States is very pleased that the Quartet was able to issue a statement today with a concrete and detailed proposal to begin a negotiation between the Israelis and the Palestinians without delay or pre-condition," she said.