Palestinians will not sway on principles, Abbas tells Kerry

At a Wednesday meeting in Paris, Palestinian Authority (PA) President Mahmoud Abbas reiterated to US Secretary of State John Kerry that the PA would not accept any agreement that didn't uphold five "fixed" principles as spelt out by the Palestinian side. 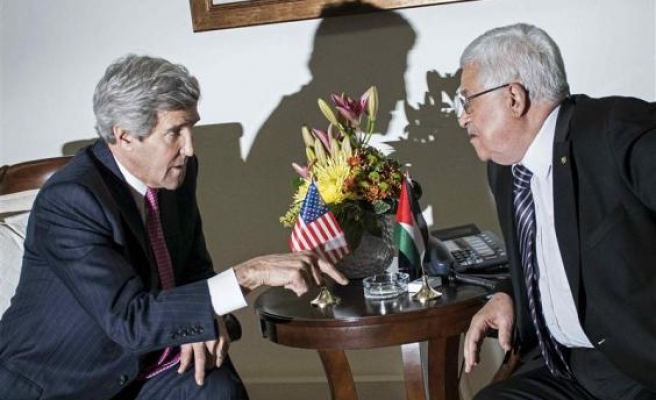 Palestinian Authority (PA) President Mahmoud Abbas has reiterated to US Secretary of State John Kerry that the PA would not compromise on longstanding Palestinian principles in ongoing peace talks with Israel, an Abbas spokesman said on Thursday.

At a Wednesday meeting in Paris, Abbas reiterated to Kerry that the PA would not accept any agreement that didn't uphold five "fixed" principles as spelt out by the Palestinian side.

"We will not recognize a 'Jewish state,' nor will we approve illegal [Jewish-only] settlements," he said. "We are committed to achieving a Palestinian state based on the 1967 borders, with Al-Quds [occupied east Jerusalem] as its capital."

Abbas also called for a "just solution" to the issue of Palestinian refugees and the release of all Palestinian prisoners languishing in Israeli jails, according to the spokesman.

Abbas is the president of the PA-controlled West Bank, while the Gaza Strip has been governed by Hamas – the PA's political rival – since 2007.

Earlier this month, Hamas Prime Minister Ismail Haniya said his group would reject any framework peace agreement hammered out by the PA and Israel.

Kerry, during his visit to the region last month, presented both sides with a proposed framework for an eventual peace agreement that addresses "final status issues" – namely, borders, security, the fate of Palestinian refugees and the status of Jerusalem.

About 500,000 Israelis now live in more than one hundred Jewish-only settlements built since Israel occupied the West Bank and East Jerusalem in 1967. The Palestinians want these areas, along with the Gaza Strip, in which to establish their future state.

Palestinians insist that the issue of Israeli settlement-building must be addressed before a comprehensive final-status agreement can be reached.