The pope made his appeal to Shimon Peres and Mahmoud Abbas at the end of an unprecedented prayer meeting among Jews, Christians and Muslims in the Vatican. 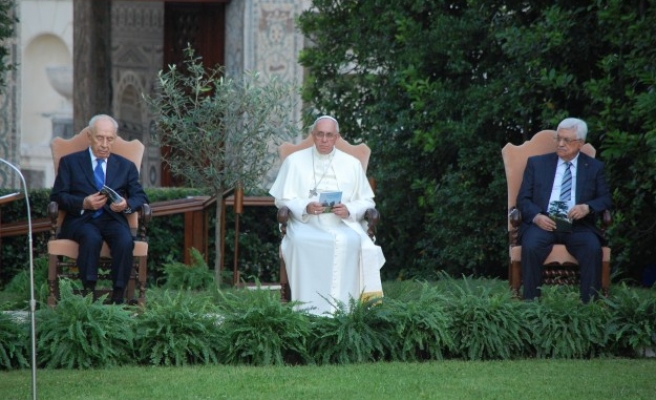 Pope Francis on Sunday told the Israeli and Palestinian presidents that they "must respond" to their people's yearning for peace in the Middle East and find "the strength to persevere undaunted in dialogue".

The pope made his appeal to Shimon Peres and Mahmoud Abbas at the end of an unprecedented prayer meeting among Jews, Christians and Muslims in the Vatican gardens that marked the first time the two presidents have met in public in more than a year.

"Peacemaking calls for courage, much more so than warfare. It calls for the courage to say yes to encounter and no to conflict: yes to dialogue and no to violence; yes to negotiations and no to hostilities; yes to respect for agreements and no to acts of provocation; yes to sincerity and no to duplicity. All of this takes courage, it takes strength and tenacity," the pope said.

Francis said seeking peace was "an act of supreme responsibility before our consciences and before our peoples" and noted that millions around the world of all faiths were praying together with them for peace.

"We have heard a summons, and we must respond. It is the summons to break the spiral of hatred and violence, and to break it by one word alone: the word 'brother'," he said.

He said the children who have been the innocent victims of wars and conflicts made the search for peace an imperative.

"The memory of these children instils in us the courage of peace, the strength to persevere undaunted in dialogue, the patience to weave, day by day, an ever more robust fabric of respectful and peaceful coexistence, for the glory of God and the good of all," he said.