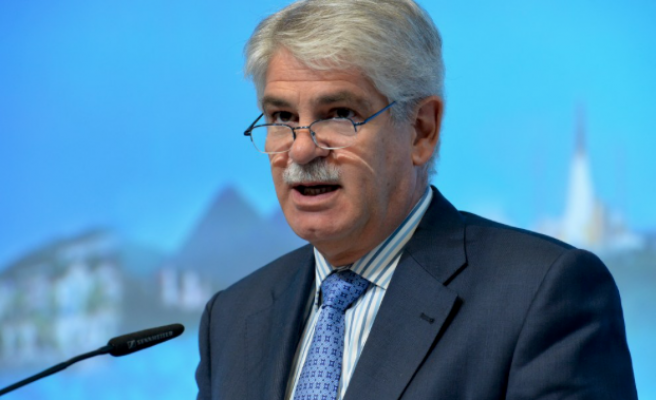 Spain’s Foreign Minister on Monday expressed hope that his country would recognize Palestine "in the coming months" in a move to enhance peace efforts in the decades-long Israeli-Palestinian conflict.

Alfonso Dastis made the comment during a joint press conference with his Palestinian counterpart Riyad al-Maliki who is in the capital Madrid accompanying Palestinian President Mahmoud Abbas.

Dastis said he hoped Spain would recognize Palestine in the coming months after a comprehensive agreement within the E.U.

“Recognition of the Palestinian state should be coordinated within the E.U. and should aim to help a peace agreement between Israel and Palestine in the future,” the Spanish minister said.

For his part, al-Maliki said Spain and Palestine are “two friendly countries” working together to support peace and development in the region.

During the meeting, Abbas briefed the king on developments in the Palestinian territories and Israeli violations, the agency said.

Abbas arrived in Madrid on Sunday for an official visit to Spain upon an invitation from King Felipe VI.

Israel occupied the West Bank, including East Jerusalem, during the 1967 Arab-Israeli War. It annexed the entire city in 1980, claiming it as the Jewish state’s “undivided and eternal capital” -- a move never recognized by the international community.